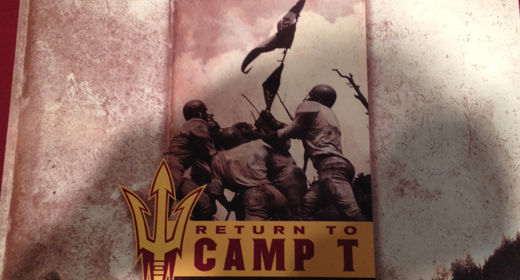 Arizona State football is looking to turn-back-the-clock, but they need some help.

To do so, the university has started a “Return to Camp T” campaign with a goal to raise $150,000, which Patterson said would predominantly be put towards the practice field, video services, food, transportation and other necessities needed to make the site functional. If at least $150,000 is raised by June 1st, the Devils plan to visit Camp T August 14-18 with a scrimmage held on the 18th.

“We’ve heard from a lot of former football players and student-athletes so we ask for your support to make this happen,” Patterson told the assembled media. “So we can make this a reality not just for the upcoming season, but many football seasons to come in the future.”

Camp Tontozona, which dates back to 1960 when legendary coach Frank Kush took his team for preseason workouts in the scenic pines just outside Payson, hasn’t been utilized since 2008 when former head coach Dennis Erickson opted to keep his team in the Valley and utilize the indoor, on-campus Dickey Dome which was constructed the same year.

For first-year head coach Todd Graham, it’s a way to re-connect with ASU’s football roots and place his personal stamp on the program after taking over for Erickson late last year.

“I think tradition is what binds us together,” Graham explained. “That’s what makes college football so special. That is one of the main reasons why I think it’s very important to go back. The idea of developing character, discipline, toughness…the team-building opportunities you have at a place like Camp Tontozona are incredible for our football team.”

Payson Mayor Kenny Evans, who attended the gathering, said the school will have access to the city’s all-weather, pro turf field in town if thunderstorms wash out practices at Camp T.