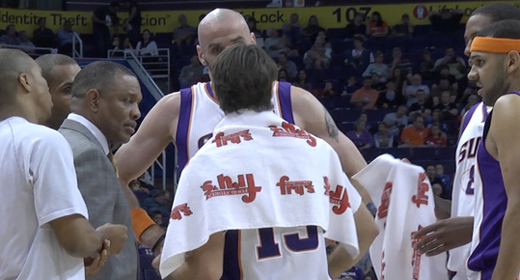 Before the Oklahoma City Thunder game on Wednesday, Suns head coach Alvin Gentry said that the only scenario he is paying attention to in order to make the playoffs is that they need to win every game.

Well they have not been able to do that exactly having lost to the Thunder but after a giant win over the Clippers, the Suns are right back into that eighth and final playoff spot.

One thing that I have seen in these last two games with the Thunder and Clippers has been an elevated level of trash talk and chippyness. That is something we have not seen from this Suns team that is supposedly full of a bunch of nice guys.

On Wednesday against the Thunder, Sebastian Telfair got into the face of James Harden and Robin Lopez wouldn’t back down from Kendrick Perkins. Though the game ended in a loss, the Suns would not back down without a fight.

On Thursday against the Clippers, everyone saw Jared Dudley’s response to Kenyon Martin’s hard foul and staring down Blake Griffin chest-to-chest asking him “what’s up?”

After the game, Jared Dudley had this to say with those altercations, “it was the emotion of the game, me being frustrated with the foul on Kenyon and I took it out on him (Blake Griffin). He’ll be OK. He’s big enough.”

I am not saying that I condone literally fighting in a game, nor do I support a dirty foul like the one that Robin Lopez had on Blake Griffin that had him ejected from the game. But for a team that continues to be written off, a team that has gotten little to zero attention all season, and a team that has heard fans be proponents of tanking for a high draft pick, it is great to see the fight and it is even better seeing the Suns not back down from the bullies atop the west standings.

“It just shows you the fight in this team to where we’re not just going to lay over and let a team run through us,” Jared Dudley explained after the Clippers game.

Despite there only being three games left in the season, there are a ton of playoff scenarios but for the Suns, I believe there are two things that they need to do over the span of the final three games in order play post season hoops.

Alvin Gentry believes there is no such thing as a “must win game” because you should go out and win every game. I completely agree, however if there was anything remotely close to a “must win game,” it would have to be in Utah on Tuesday. The Suns and Jazz are currently tied for the final spot but the Suns hold the tie breaker having won the first two of three meetings with them. Win that game and you create separation.

The second thing the Suns need to do is at least win two of the final three games. Winning all three is obviously ideal. The Nuggets are only a game and a half up on the Suns for the seventh seed and winning all three could get you there. We already have been over the fact that Utah has to be a win. The other win that would make the Suns playoff lives a lot easier would be winning on Saturday vs. Denver.

If you beat Denver, you guarantee the fact that you will at least be tied with the Jazz going into the game with Utah. If that is the case and the Suns are tied with Utah going into their head-to-head matchup, then the Suns could have the opportunity to completely eliminate the Jazz before the last game of the season.

That would be ideal especially because the final game is with the Spurs who have won all three meeting with the Suns to this point. Even though knowing coach Popovich, a lot of the SPurs starters could sit that last game of the year.

The second half of the season for the Suns has been a wild ride to this point and I am looking forward to seeing how the next week plays out. And you should too. As a fan you do not root for draft picks, you root for wins.

Maybe the Suns do not have a championship caliber team right now but at this point they have a smaller chance of winning the draft lottery as they do winning a title. So enjoy the team while they are fighting like crazy to stay alive.