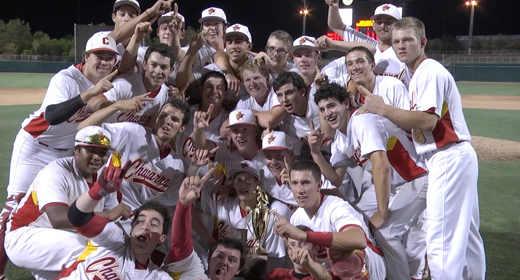 It was a moment that most kids grow up playing out in their heads.

With the game tied in the last inning, stepping up to the plate and drilling a walk-off home run to win the championship.

That exact scenario was played out for Dylan Cozens and the Chaparral Firebirds as Cozens drilled the first pitch he saw, a fastball, well out of the Camelback Ranch Stadium in Glendale. A walk-off two run home run by Cozens which made Chaparral State Champions for the first time since moving up to Division I, beating Brophy 5-3.

“Not at all,” said Cozens after being asked if there could be a more fitting way to win the state championship. “It’s the best way to end the season.”

Cozens was the hero in a game that was filled with many stand-out performances.

Chaparral got things going right from the start drawing back-to-back bases loaded walks from Brophy starting pitcher David Graybill and led 2-0 after one.

Brophy brought their big power to the big game. Nick Jewett and Ryan Castellani would each hit solo home runs which would tie the game at two. Castellani only a sophomore, added a triple in the game as well.

Relief pitching was then the story of the game. Chaparral got an unbelievable performance from junior Dillon Bigcrane who used off-speed pitches to strike out seven batters in just 2 and 2/3 innings.

“You’ve got to have that bulldog mentality,” explained Bigcrane. “You can’t have any fear out there and you have to trust your guys riding with you out there all the way.”

Between Bigcrane and the pitchers before him, Tyger Talley and Nick Diamond, struck out 14 Broncos total in the game.

Brophy also receive a great relief pitching performance from senior Jake Steffans who sent down six consecutive batters in the fifth and sixth.

But in the seventh and the game tied at three, Steffans would make his first and only mistake of the night giving up the big game winning two run home run off the bat of Dylan Cozens.

“I have been part of Arizona baseball my entire life, growing up here,” said Chaparral head coach Sam Messina. “To be a part of a couple of these (state championships) with these guys is really surreal. It hasn’t sunk in yet.”

Chaparral was the only team not to lose a game in the Division I bracket, paving the way to a state title and winning at a level that no other state championship team from Chaparral has achieved.


Congratulations also in order for the Sunnyslope Vikings as they are Division II state champions after knocking off Liberty 6-5 from Phoenix Municipal Stadium on Tuesday. Like Chaparral, Sunnyslope did not lose one game in the playoffs.