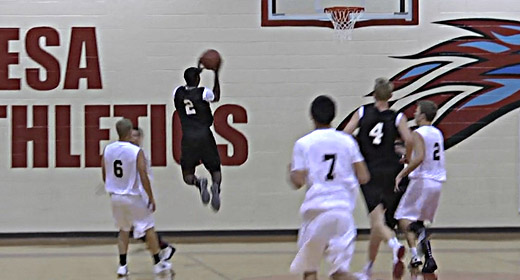 If you’re a fan of basketball, especially high school basketball, and you missed the Arizona All-Stars in action this past Saturday night, then you missed a treat!

The best high school basketball players from the immediate past and present gathered together at the Theo Heap Gymnasium on Saturday.

It was a great mesh of underclassmen, upperclassmen and those who have moved onto the next level in their lives and careers, meaning college.

In the underclassmen game, Basha guard Jaron Hopkins looked like a man among boys.

Hopkins looked two steps faster than everyone on the court, including his own teammates. He had 27 points, as the West won 74-68.

He started off his night by winning the slam-dunk contest over his Basha teammate, Torren Jones, who attempted to dunk over four people seated in chairs.

Unfortunately, it didn’t happen, because if it did, that would’ve brought the house down.

“There’s a lot of talent out here, and I was fortunate to win the slam-dunk contest,” Hopkins said.

Hopkins was one of many exceptional players who took to the court on Saturday, another being Division I Player of the Year Calaen Robinson, who will attend Arizona State in the fall, and suit up for head coach Herb Sendek.

His North team defeated the South team 82-81 in overtime in the finale.


Robinson, who is such an outgoing and personable young man, said he enjoyed meeting new people and forming new friendships along the way.

“It’s just nice to get that experience, especially going on the college level with people who are from other states,” Robinson said. “I’m glad it ended on a good note.”