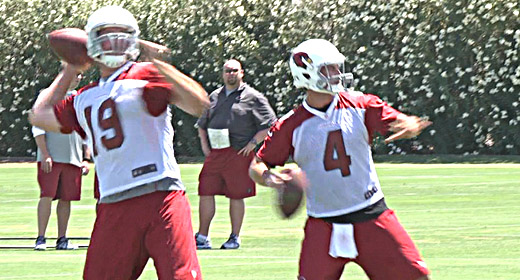 Remember around this time last year, when there were no OTAs because of the lockout?

Remember how sick you were when you looked on TV or the Internet and all you saw was talk on the lockout?

I remember it vividly, and I also remember how excited I was when the lockout ended and I knew that the NFL was back.

Thank goodness that feeling hasn’t left, because on Tuesday it intensified, as the Cardinals offseason officially kicked off with the start of OTAs, or organized team activities.

The great thing about OTAs is the fact that the veterans and rookies get to come together for the first time and get some quality fieldwork in.

The first thing that caught my attention on Tuesday was the sense of immediacy in the way everything ran. This looked like a very well prepared team right off the bat.

Of course no team is perfect, and you saw that, as there were dropped balls, overthrown passes and mis-run routes, but that’s going to happen and it happens to 31 other NFL teams, not just the Cardinals.

Head coach Ken Whisenhunt knows that this will be a work in progress, and it will take time to make this team as perfect as it can possibly be.

“That’s what we’re trying to get done out here,” Whisenhunt said. “Make sure that we work on correcting our mistakes, work on the right technique and get our timing down.”

For quarterbacks Kevin Kolb and John Skelton, this is their first full offseason with the Cardinals, thus their first OTAs.

Kolb says the process in which plays are installed is different than how they are implemented in training camp.

“It’s like a slow soaking process,” Kolb said. “Then it becomes second nature and you can read and react, instead of trying to think your way through everything.”

Skelton took the reigns from Week Nine on last season (with the exception of the Cowboys game that Kolb started and won), going 6-2 in that period, all the while building up his resume and amassing some game film he could go back and watch and learn from.

As the phrase goes “it’s not a sprint, it’s a marathon.” That describes the Cardinals and their season to a T.

The OTAs will continue over the next three weeks, and as they continue and lead into training camp and beyond, this team will form right before your very eyes.

If you’re still pumped after the Cardinals second half push last season, with virtually no offseason to speak of, just imagine the possibilities with an entire offseason at their disposal.