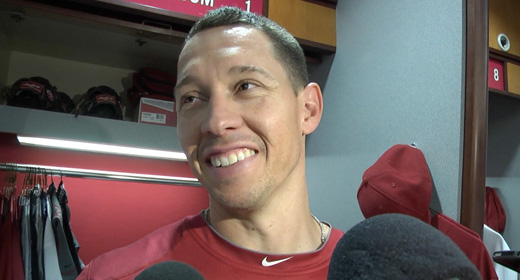 Diamondbacks Manager Kirk Gibson is looking for someone to step up offensively.

Coming off a tough road trip, the Diamondbacks had more than their share off opportunities to come out on the winning side of games in just about every game they lost on the road trip.

Part of that has had to do with a bullpen that has been a little inconsistent. The other part has been the offense not taking full advantage of runners in scoring position.

One player however has been doing his part in provide some sort of spark to this reeling Diamondbacks offense. And that has been Cody Ransom.

Since being called up on April 18 when Chris Young was sent to the disabled list, Ransom has played ten games and has batted .351 with four home runs and twelve runs batted in.

“He has done a great job,” said Manager Kirk Gibson after Monday’s 9-6 loss to the St. Louis Cardinals. “It has been hard to take him out of the line-up, no doubt.”

Ransom, who has been up and down between the minor leagues and major leagues over a majority of his career, is staying humble despite this hot stretch he has been on of late. Only pointing out the things has been struggling with instead of being excited about the positives.

Sometimes (Ransom says he is playing well) and sometimes I’m pretty bad,” explained Ransom. “I need to do a better job in certain situations I think and I’m going to keep working at it.”

While Gibson is happy by the production of Ransom since he was called up, he pointed more guys need to step up as well.

Diamondbacks continue at home for the next week before heading back on the road to face NL West foes, Colorado and Los Angeles. The rest of the team will need get on this Cody Ransom-esk roll if they want to be above .500 heading into important in-division road games.