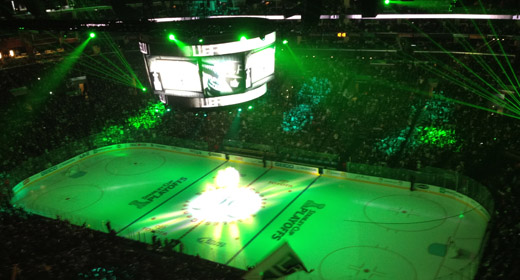 The never say die Coyotes live to fight another day.

Behind two Shane Doan goals and another playoff shut-out from Mike Smith, the Phoenix Coyotes avoid the sweep and knock off the Los Angeles Kings 2-0 from Staple Center on Sunday.

“We have been desperate since January,” Smith joked. “We were down 3-0 going into this game so if there was ever a point you are going to be desperate, I think knowing you can go home if you lose this game, I think that is where desperation sets in.”

It was clear that the Kings, who had only lost one game in the playoffs going into Game 4 on Sunday, wanted to put the Coyotes out of their misery right from they start.

In the first 10 minutes of the game, the Coyotes had three penalties (two were power plays) and only one shot on goal.

Despite being on their heels all period, the Coyotes finally took advantage of a power play and took a 1-0 lead. Shane Doan scored the goal, the first power play goal of the series for Phoenix, and Doan’s fourth of the playoffs.

The first period was Coyote Ugly at its finest. Despite being out-shot 10-5, the Coyotes took that 1-0 lead into the the dressing room for the first intermission. The first time the Coyotes had led after a period in the series.

“I think if you have watched our team play, not just in the playoffs but this entire year, a lead is valuable to us,” explained Coyotes Head Coach Dave Tippett. “If you get a lead you feel like you can push the game along and that is exactly what happened tonight.”

It may have taken three games and one period, but the Coyotes came out in the second period and looked like they had finally figured out the Los Angeles Kings.

For half the period the Coyotes were blocking shots (blocked eight after two periods) and forcing the tempo. They were then rewarded as Shane Doan netted his second goal of the day on a play that had to be reviewed after the puck had hit the camera inside the goal.

Coyotes played their best period of the series and took a two goal lead into a potentially series saving third period.

Based on how things had gone in the series to this point, you knew the Kings were going to come out firing in the third. But the Coyotes stood their ground and survived the initial attack out of the dressing room unscathed and kept the 18,402 in attendance at Staples Center absolutely quiet.

The series now goes back to Glendale for Game 5 of the Western Conference Finals where once again the Coyotes will look to avoid being eliminated. The biggest key will be for the team to build off their best played game of the series in front of the home fans.

“We think our fans will be riled up, we will be on home ice and we will have a chance to stay alive again,” added Tippett.”We are going to go home, we feel like we can grab some momentum off of this game. You go home and try to push it along again. We are in the same situation.”


Puck will drop for Game 5 at 6:00 pm on Tuesday from Jobing.com Arena.