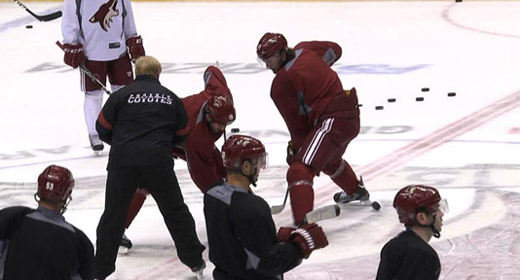 Coming off their most successful season in franchise history, the Phoenix Coyotes  are left to sit, wonder, and wait.

Following their emotional Game 5 loss to the Los Angeles Kings in the Western Conference Finals last week, the focus now shifts from on the ice to off it. The NHL, the Coyotes organization, the City of Glendale and Greg Jamison and his group of investors must look to create a way to keep the ‘Yotes in Arizona not just next year, but several years to come.

For now, the future looks bright for hockey in the desert.

“Deputy Commissioner Bill Daly of the NHL told me [Wednesday] things are moving along with Jamison,” Arizona Republic Coyotes insider Lisa Halverstadt told Brad Cesmat Wednesday on ‘Big Guy on Sports.’ “[Daly] does not believe roadblocks will derail this thing, but we’ve had twists and turns with previous bids that have gone sour.”

The Glendale City Council recently slightly voted in favor of a $17 million operations fee which would be used to run Jobing.com Arena, keep the electricity on, and help cover staff costs associated with running the overall operation of the franchise. The City Council would like to keep the team in Glendale, but some believe the price tag is too steep.

Halverstadt stressed the residents of Glendale are torn as to whether they want to the Coyotes back next season and one person would like the issue resolved, one way or the other, in the near future.

“It seems it has worn most on [Glendale] Mayor Elaine Scruggs,” she told Cesmat. “She is tired of being put in situations towards the end of the season where the Council has to make a big decision. She’s concerned the Council may be pushed into a decision that they don’t want to make or may not be best for their city.”

For now we will sit and wait, again.

It is officially do or die for the Phoenix Coyotes