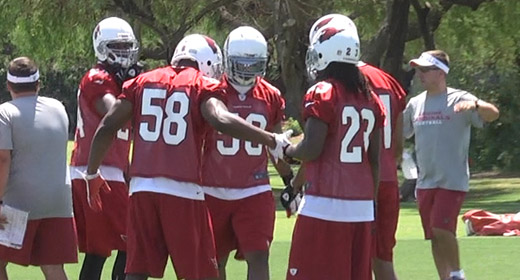 What a difference a year makes. Last summer, Arizona Cardinals linebacker Daryl Washington and his teammates were left waiting, wondering when or if the NFL lockout would end with labor peace. There were no players working out at the Cards facilities. No Organized Team Activities. No communication with coaches.

As the Red Birds wrapped up their second week of OTA’s, Washington and the rest of the defense have the benefit of some on-the-field-training courtesy of defensive coordinator Ray Horton, who came over last year from the Steelers.

“It’s a huge difference for us,” Washington told Brad Cesmat on ‘Big Guy on Sports.’ “Just coming in and having that chemistry during OTA’s. Having that off-season where we can get in and bond with one another. I think that carries over to the field. That plays a big factor as to what we do as a defensive unit.”

This is a unique summer for the Cards as they will likely start training camp early after being selected to play in the annual Hall of Fame Game against the New Orleans Saints August 5th in Canton, Ohio. Washington said he doesn’t expect any changes in his off-season training with the slight shift in schedule.

One thing that has changed for the talented third-year linebacker from TCU is his weight. Drafted at 225, he’s now up to 241, but says you won’t see a different player, or even notice the weight gain on the field.

“Gaining weight and keeping my speed was [important] to me this off-season,” Washington explained to Cesmat. “My game hasn’t slowed down so I’m locked and loaded ready to go. I have gotten stronger and I have gotten bigger, but you probably wouldn’t notice a difference.”

The team resumes OTA’s Monday June 4th. They will run through Thursday the 7th at the Cardinals team headquarters in Tempe.