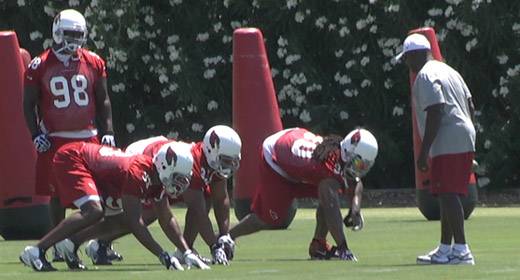 Cardinals defensive end Darnell Dockett is never one to hold his tongue on any topic, so on Wednesday, on Day Five of OTAs, he was in his usual form.

Dockett said the team is progressing and coming along well in the early stages of the OTAs.

“We’re so far from where we were last year,” Dockett said. “Right now we’re clicking on all cylinders and trying to get better every day we step on the field.”

“I’m so hard on myself it’s ridiculous,” Dockett said. “I just need to raise my gameplay up a whole lot.”Not everything is perfect though, as you would expect. Dockett said he has been fining himself when he makes a mistake, in order to make himself accountable for those mistakes.

“I don’t sit back and make excuses about anything,” Dockett said. “That’s how I’m carrying it this year.”

Dockett is all about raising the bar for the defense and the team, starting with himself. He wants to be an example to everyone on how you should play the game.

“We’re just trying to raise the standards up  around here and stop making excuses on things and try to win ball games,” he said.