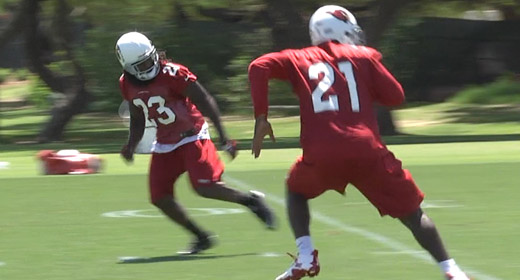 William Gay knows all about Coach Ray Horton and playing in a strong defense, as they were both part of the Pittsburgh Steelers prior to their reunion with the Cardinals.

Horton spent seven seasons with Pittsburgh, with his last four as the team’s defensive backs coach.

Gay spent the past five seasons with the Steelers, and naturally being a cornerback, worked under Horton’s leadership.

The Cardinals lost cornerback Richard Marshall to the Dolphins in March, so they had to replace what was lost, and Gay slid in as Marshall’s replacement, signing a two-year deal no less than two weeks after losing Marshall.

Being that this is Gay’s first move to a different team, you would expect things to be a little crazy with the transition, but Gay said things are going as well as can be expected.

Having Coach Horton as his boss, a familiar face, has made the move easier for Gay, but he’s noticed some new things Horton’s added to the defense that he didn’t see in Pittsburgh.”Basically it’s about building a chemistry,” Gay said. “Once you step out on the field, all the coaches are on the sideline, and you have to trust your teammates that are out there with you.”

“He’s put his little spices on the defense, that’s the new part I have to learn,” Gay said. “Also, get rid of the terminology that was used at the Steelers, and learn the new terminology with my new team.”

Gay hasn’t missed a game since coming into the NFL back in 2007. Last season, he had 61 tackles, two interceptions and 12 passes defensed.

In other words, the Cardinals got more stable at the corner position by bringing Gay in.

Gay talked about if there’s going to be a competition at cornerback, because as of the writing of this article, the Cardinals have 10 cornerbacks on their roster, with no telling what it will get cut to when all is said and done.

“It’s competition everywhere,” Gay said. “Being able to put the best 11 out there, that’s what everybody’s focused on.”

“We just want to make sure we go out there and get a W.”