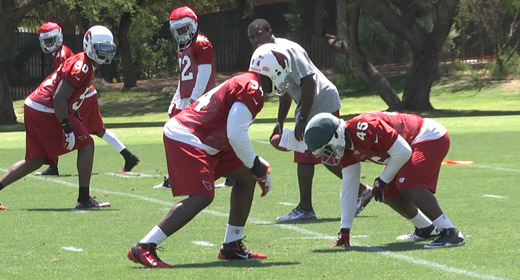 Have you heard the phrase “The Third Time’s A Charm”? In the case of linebacker O’Brien Schofield, the phrase fits him to a T.

Schofield is headed into his third season with the Cardinals, and big things are expected of the 25-year-old.

With the departure of Joey Porter, and the future of Clark Haggans up in the air, along with a plethora of young linebackers on the roster, now is the time for Schofield to take the starting reigns at one of the outside linebacker positions, which in his mind, he’s already done.

“That’s my mindset,” Schofield said. “Each day I’m trying to get better and perfect my craft and take mistakes off the film.”

The linebacking corps as it stands is an interesting one, as there are currently four rookie LBs on the roster, among them free agent Quentin Groves, whom the Cardinals signed last week.

Head coach Ken Whisenhunt knows he and his staff will have to go back to the lab and figure out what to make of this linebacking crew.

“We’ve got some young guys we have to find out about,” he said.

As far as the outside linebackers are concerned, there are two guys – Schofield and Sam Acho – that really need no figuring out, after both gentlemen posted very solid 2011 seasons.

Schofield and Acho combined for 77 tackles and 11.5 sacks. Schofield upped his tackle total by 25 compared to his rookie season, while Acho forced four fumbles on his side of the field.

Schofield says he and Acho have a strong synergy working right now, which should bode well for the defense this season.

“The way we mesh and play off each other, I think we could have something special.””We really push each other,” Schofield said. “The way Sam is, he’s a real hard worker, and I’m picking up from his vibe, and I’m trying to get back in the groove of things.”

Safety Adrian Wilson sees the talent and potential in Schofield, and therefore laid the gauntlet down for him this coming season: he wants O’Brien to have at least 10 sacks (he had 4.5 last season).

That would surely be welcome to a franchise that hasn’t had a linebacker have 10 sacks or more since 1990, when ROLB Ken Harvey did it for the-then Phoenix Cardinals.

Time for a breakout for Schofield isn’t it?