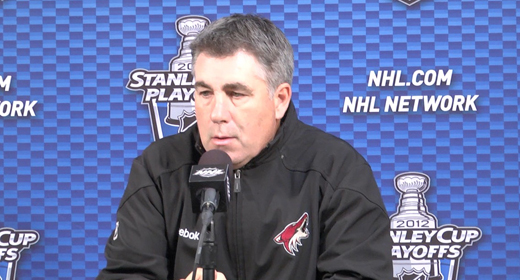 After losing both games one and two in Glendale, the Coyotes needed to steal a win on the road to get back into the series, but were unable to do so as they fell to the Los Angeles Kings 2-1 from a sold out Staples Center with 18,367 fans in attendance on Thursday night.

The Coyotes now trail the Kings three games to nothing in this best of seven series.

For the first time in the Western Conference Finals, the Coyotes came out the aggressor. That was seen during the only power play came in the period, which was a Shane Doan roughing call. That Coyotes penalty kill looked more like a penalty kill from the Chicago series as the puck spent most of the time in the Kings zone.

The Coyotes out-shot the Kings 11-8 in the first period and had quite a few quality chances at Jonathan Quick. Two shots each came from Taylor Pyatt and Lauri Korpikoski.

However the Coyotes were unable to capitalize in the period and there was no score after the first period.

“Our first period was the best we played in the series so far,” explained Coyotes head Coach Dave Tippett. “But we need more people to make plays at critical times.”

But it would not take long for a goal to be scored. The Coyotes would take the lead for the first time in the series in the second period on Daymond Langkow’s first goal of the playoffs. His 5th playoff goal of his career.

That lead was short lived for the Coyotes. Anze Kopitar broke free for a breakaway and put the puck past Mike Smith to tie it at one. For Kopitar it was his 5th goal of the playoffs.

Then the Kings would come out blazing to start the third period and looked to have shocked the Coyotes with the increased intensity. The Kings quickly took the lead on a goal by Dwight King. His 5th of the playoffs. And they would never look back.

“I don’t think we played bad for very much of the game. For the most part we played similar to what we wanted,” said Coyote Captain Shane Doan. “We didn’t find a way to score, we had a couple chances that we didn’t burry and that’s the difference in the game.”

A major statistic after Game 3 is that the Kings came into the game with 28 straight penalty kills. After game three, they now have 30 straight. That is an area the team could have clawed back with some crucial goals but were unable to capitalize which goals back to coach Tippett’s comments on his team not making plays at critical times.

Now down 3-0 in the series, the Coyotes already look toward Game 4 with the mentality that they have nothing to lose.

“It’s not like its (coming back from a 3-0 deficit) never been done,” explained Coyotes defenseman Keith Yandle. “We are a resilient group and we can battle back and play hard.”

The Coyotes will look to keep their series alive on Sunday for game four. Puck drops at noon from Staples Center.

For more coverage of the Phoenix Coyotes from Los Angeles, follow Jared Cohen on Twitter at @JaredPros2Preps.