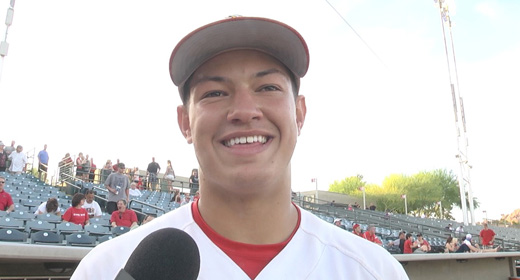 Baseball fans have seen some monster home runs out at Phoenix Municipal Park over the years from players in the Oakland Athletics organization like Jason Giambi or from others around the major leagues.

In Chaparral’s second playoff game of the Division I state baseball tournament last Saturday, Firebird senior Dylan Cozens laced one of the farthest balls that have been seen in that stadium. That is including ones from those who gear up for the big league season during Spring Training.

But that is not the beginning of Dylan Cozens’ story. What a difference a year makes.

One year ago, Dylan Cozens was attending Desert Mountain High School and after disagreements with members of the Desert Mountain baseball team, Cozens left the program and the school and moved with his family to finish his high school career at Chaparral.

For Cozens, that move could not have worked out better.

Cozens was introduced to then Chaparral head football coach Charlie Ragle who got him to try on some football pads. Something Cozens had not done in high school.

In just one season on the Firebirds defensive line, Cozens along with Jarvis Lewis created a one of the most dominant defensive fronts in the state paving the way to a state championship.

There are not many athletes out there that can play a sport for one season and then pick up Division I offers. That is the case for Cozens who was given a scholarship to play football at the University of Arizona, following his first and only football coach, Ragle who joined Rich Rodriguez’s staff last December.

But his senior year was not finished at the conclusion of football season. Baseball has been Cozens true love in life and he has had every intent to see that through.

In his first season with the Firebirds baseball team, Cozens currently has 18 home runs, which is good for the most of any player in the state and is among the most in the nation at that level. In addition, Cozens sports an OPS over 1.200, which is almost unheard of.

At the conclusion of his time at Chaparral, Cozens also intends to make his presence felt at Hi Corbet Field in Tucson with Andy Lopez and the University of Arizona baseball team, currently one of the top teams in the nation.

These days you do not see two sports athletes at the Division I collegiate level very often but that will be the case and it is something Cozens said both Coach Lopez and Coach Rodriguez are “fine with.”

However, all this talk of a presence in Tucson could amount to nothing. Cozens and his family are confident that he will be drafted by a major league baseball team this summer. Whether or not Cozens will forgo his collegiate career and go straight to the pro’s will depend on how high he is picked but it is a definite possibility if the situation is right.

Before any of these decisions are made, the Chaparral baseball team is rolling and in great position to make a run at the state title. If the Firebirds do in fact win it all, that would be a state championship in football and baseball for Cozens.

“That would be perfect,” Cozens mentioned. “No better way to end the year.”

An end to a remarkable year at that.

Remembering games that were played in the rain