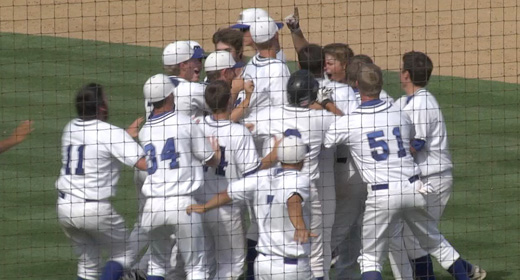 The Mesquite Wildcats sure like to live on the edge.

Earlier in the week the Wildcats escaped elimination by getting a walk-off win over the Red Mountain Mountain Lions. On Saturday again in an elimination game against the Desert Mountain Wolves from Phoenix Municipal Stadium, Mesquite get a walk-off a single, this time from Matt Waldren, eliminating the Wolves 4-3 in nine innings.

Mesquite jumped onto the board and carried a 2-0 lead all the way to the fourth inning, until Desert Mountain got themselves on the scoreboard with a solo home run off the bat of Ben Rodriguez.

Mesquite would create a little bit of breathing room in the bottom of the sixth. Senior clean-up hitter Jake Howard went deep for a solo blast of his own making it 3-1 heading in the final inning.

In their last hope to advance, Desert Mountain rose to the occasion getting two runs to force extra innings. The tying run, a RBI sac fly off the bat of David Greer scoring the man who drove in the first run, Drew McLaughlin.

These nail biting games are nothing Mesquite isn’t used to.

Mesquite moves on to play Hamilton from Phoenix Municipal Stadium at 6:30 on Tuesday.