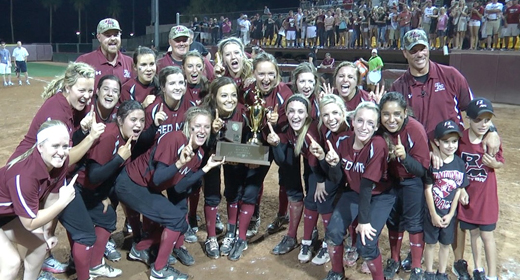 When you think of Red Mountain softball, you think dominance.

Coach Richard Hamilton and his program have been beyond successful since he became head coach, winning back-to-back Division I state titles coming into this season.

Well, after Monday night, you can add another “back” to that, after the Mountain Lions defeated the Basha Bears 5-2 in the Division I softball championship at Farrington Stadium in Tempe, Ariz.

It’s the third straight title for Red Mountain, and the second straight year in which they defeated Basha for the championship. Last season, they defeated the Bears 5-4 for the title.

Pitcher Breana Macha gave up seven hits in getting a complete game victory for Red Mountain.

Her offense gave her all the help she needed right off the bat.

The Mountain Lions would touch Basha starting pitcher Kailey Regester for four runs and three hits in their opening half of the first inning.

That would be all Macha would need to get her part going. The defense played a huge role in the win as well, as freshman left fielder Alyssa Fernandez made several dynamic catches to prevent Basha from getting to Macha.

“Being a pitcher, you always want your defense behind you,” Macha said. “I trust them, and getting more runs on the board helped relax me.”

Coach Hamilton had nothing but praise for his young outfielder and what she did to help secure their championship.

“She’s been coming on, getting better and better,” Hamilton said. “We took an athlete and said ‘Hey, we need to move you,’ and she did that and obviously has done it well.”

Outfielder Siera Phillips, who had a two-run double in the first inning, is one of five seniors on the squad who are moving on, but not without taking three titles with her. She couldn’t think of a better way to end her time with Coach Hamilton and her teammates.