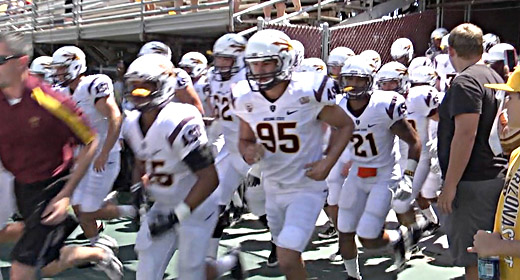 Back on April 19, ASU head Coach Todd Graham along with Vice President of University Athletics/Athletics Director Steve Patterson ignighted the initiative to “Return to Camp T.” The campaign was a success as more than 500 people reached out to Sun Devil Athletics to send a donation and $150,000 was raised so that the football program could return to Camp Tontozona in northeast Payson this fall.

“We look back at Tontozona and recognize it’s a place that binds many generations of ASU football going back nearly 60 years,” explained Steve Patterson. “I am new here, Todd’s new here, but we wanted to re-engage in one of the great traditions ASU had which was first started by Frank Kush many years ago. So we are really excited about going back there.”

Restoring tradition has been something Todd Graham has really strived to achieve since being named head coach. Camp Tontozona is one of those traditions which Frank Kush began back in 1960.

“It is a great day that we can restore that tradition and hopefully it will be something that can always continue,” coach Graham mentioned. “I’m excited, I can’t wait to be out at the top of Mount Kush with the team and sing the fight song and I’m looking forward to having Coach Kush address out team when we’re there.”

Meeting that number financially was largely because of the White Mountain Sun Devil Club Alumni Chapter which matched every dollar given up to $65,000.

The White Mountain Sun Devil Club has lived by the theme of ‘the tradition continues’ and aiding in the funding of Camp T is not the only tradition which will be back in action this summer. The Sun Devil Steak Fry is returning for the sixth straight year and will be bringing Graham, Herb Sendek and famous alumni like Randal McDaniel and Danny White out to Pine Top Country Club in the White Mountains on June 22 and 23.

While returning to camp T for the first time since 2008 is something everyone is excited about, it is going to happen in a very small window in August which has raised a little concern to Coach Graham.

“We have summer school until the 14th of August, so obviously we can’t take them up before that because there is no Internet. And then your looking at an August 30th playing date so there is a very small window to make it (Camp T) happen,” explained Graham. “I had some concerns about that being so close to when we play so we are making a big effort to make this happen because we think it’s important.”

A scrimmage is slated for the final day at Camp Tontozona on August 18.