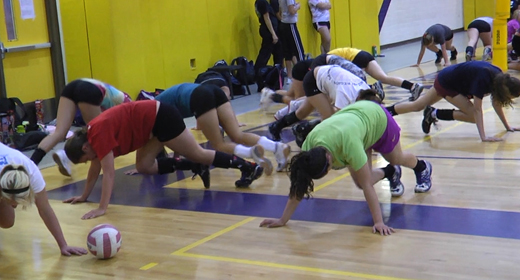 The Blue Ridge Lady Yellow Jackets are in a bit of a transition right now, as they lost six seniors off their volleyball team that made it to the state semifinals last season.

However, head coach Tami Ellsworth is embracing the fact that there’s going to be a lot of new blood on her team this coming season.

“It’s a little bit of a coaching challenge,” Ellsworth said. “It’s also a little bit exciting and kind of fun having a new group come up, and you know you have new challenges to work with.”

Ellsworth is also looking forward to the opportunity of taking her new players and shaping them into the players she wants them to be.

“We can look at things that didn’t work for us last year and create whatever we want to with this new group this year,” Ellsworth said.

Hannah Meyer is a middle blocker and one of the seniors on the team. Meyer has been a leader on some of the “lower teams,” as she describes them. She’s now ready to step up and be an even bigger voice on the varsity level.

“I’m so excited this year to be a varsity leader, which is awesome,” Meyer said. “I’ve never had that experience.”

Meyer is determined to knock the Lobos out this season, if she has to do it by herself.

“I want to beat them this year, hard, really good,” Meyer said.