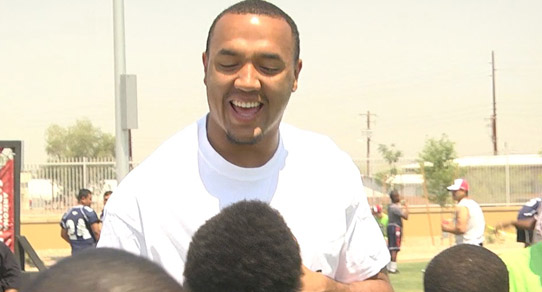 The Arizona Cardinals along with members of the Salvation Army teamed up and presented a brand new multipurpose field to the South Mountain Kroc Community Center in Phoenix on Friday.

The Salvation Army received $100,000 NFL Grassroots grant from the NFL Youth Football Fund to build the Kroc Center Athletic Field for the state of the art facility in Phoenix. It has been an eight year process in which the Arizona Cardinals organization has been a big supporter of.

“Our commitment to the community is significant and it is in a lot of different ways,” said Cardinals President Michael Bidwill. “This is just one way we are able to contribute. We are literally putting in millions of dollars into football fields for different community groups and we have been doing this or the last decade and will continue to for the next decade to come.”

Bidwill commented that the field is the same materials used for the fields that the Cardinals play on. Which is something that the entire community plans to utilize.

“It has been an eight year process and the Cardinals have been here half way through of how they can help and they said they can help with the field,” explained Major Guy A. Hawk of the Salvation Army. “We are awfully proud of it, it’s a nice field and we will be able to serve the community with it.”

Some Cardinals made their way out to the community center on Friday to present the field and also helped facilitate an hour and a half long skills camp for the kids in attendance.

“We came out here, got our workouts done this morning and just have fun with the kids, we know it a blast for them,” said Cardinals rookie Quarterback Ryan Lindley. “I just got out here (Arizona) and it is fun to ingrained in the community.”

Being out on the field with the kids reminds Cardinals first round pick Michael Floyd of when he was a kid being out at the Kroc center and involved with the kids.

“It brings back memories of when I used to get out and go to certain things in my neighborhood growing up,” Floyd mentioned. “Guys out here in my position now giving back and just having fun.”

The project for the field included the installation of irrigation, drainage, sod replacement and piped utilities. The South Mountain Kroc Center serves about 15,000 kids annually and has received great support from the Arizona Cardinals.