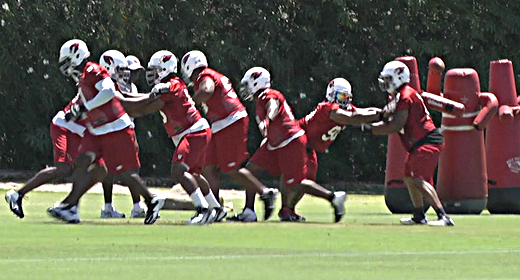 The Cardinals continue to press toward the regular season, as they kicked off mandatory minicamp on Tuesday.

A lot of what the team did on the field looked similar to what they did during the three weeks of OTAs, which is not necessarily a bad thing.

Head coach Ken Whisenhunt says Day One didn’t seem that different than any day during OTAs, but there were things he saw that he liked.

“It was a lot of energy,” Whisenhunt said. “We changed up a couple things in practice and they [players] responded.”

Whisenhunt could sense the player’s eagerness to get back to work after a bit of a break once the OTAs ended last week.

The Cardinals were busy recently, adding depth on the defensive side of the ball, as they brought back linebacker Clark Haggans, defensive lineman Vonnie Holliday and signed linebacker Quentin Groves.

“We had a plan as far as Clark and Vonnie, trying to get them back,” Whisenhunt said.

Whisenhunt said Groves is doing “a nice job [in] learning the defense,” and he’s excited to see how Groves will continue to progress as training camp looms over the horizon.

The team also made sure their draft picks were all taken care of, as they signed all seven, as the recent signings of wide receiver Michael Floyd and cornerback Jamell Fleming signaled the end of that signing period.

“It’s great,” Whisenhunt said. “Knowing that the first day of training camp, we’re going to have everybody there, that’s a big deal.”

This seems like a team that has its head on straight and knows what it wants to accomplish between now and February in New Orleans, LA, site of the Super Bowl.

You saw how they finished last season with virtually no offseason to speak of.

The coaches are spirited; the players are into it and are dedicated to winning.

There’s still a lot for the Cardinals to accomplish between now and Sept. 9, which is the home opener against the Seahawks.