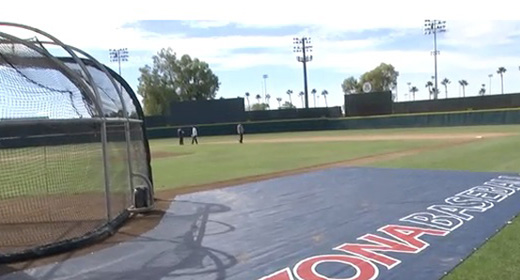 Something was almost lost in a busy Father’s Day sports weekend which included LeBron and the Heat taking a 2-1 lead on OKC, Webb Simpson winning his first major at the U.S. Open, and the Dbacks bats being silenced in southern California the last couple days.

Late Sunday night in Omaha, Nebraska, starting pitcher Konnor Wade and the University of Arizona baseball team put the finishing touches on a 4-0 masterpiece over 2nd-seeded UCLA in the winner’s bracket of the College World Series.

The sophomore from Chaparral High in Scottsdale was brilliant keeping his fastball down in the zone and keeping the Bruins off-balance all night scattering five hits and striking out four. Wade did not walk a batter, improving to 10-3 with his fifth complete game and throwing the first UofA CWS shutout since 1980.

More importantly, Andy Lopez’s team is just one win away from the CWS Championship series and will have the luxury of three days off before facing the winner of UCLA-Florida State after elimination play continues.

Offensively, UofA continued to play small ball Sunday, stringing together five consecutive hits for four runs in the fourth inning off Bruin starter Nick Vander Tuig. Designated hitter Bobby Brown capped the big-inning with a two-run double making it 4-0 which was more than enough for Wade who atoned for loss to UCLA during the regular season.

Wildcat pitching has allowed only one earned run in 21 innings, including 15-straight scoreless in their two wins in Omaha.

This success has to bring a smile to ‘Cats fans after a miserable football season which included Mike Stoops being fired and UofA basketball failing to make the NCAA Tournament for the second time in three years.