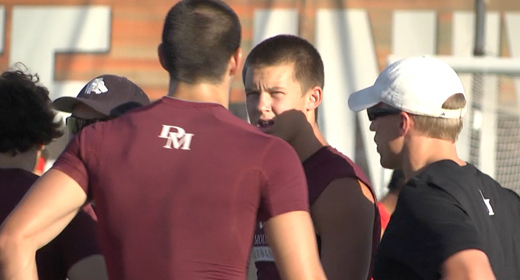 After getting only four wins in the last two seasons, the Desert Mountain football team is looking to turn their program around. And there are two soon to be juniors that are looking to put that responsibility on their backs.

Quarterback Kyle Allen and wide receiver Mark Andrews have been best friends since kindergarden. Now juniors at Desert Mountain, they have become the dynamic duo that hope to make the Wolves a force to be reckoned with in 2012.

“We are definitely going to turn things around this year,” said Allen. “Had a little bit of a tough year last year but we should do work this year.”

“This year is an up year,” added Andrews. “We have a lot of good kids returning so we should have a very good year.”

Allen has become one of the most impressive recruits of the 2014 class with great size and an even better arm. He is already sporting five Division I offers consisting of Arizona, UCLA, Boise State, Oklahoma State and North Carolina.

“I’m trying to get bigger and stronger,” explained Allen when asked how he is looking to improve before the fall. “And just perfecting my reads over the summer and making sure everything on the mental side of the game is really good.”

Andrews has known Allen for many years but has only known the game of football a short time. The 6’6″ wide receiver just started playing two years ago. That has not stopped Division I colleges from sending offers his way as he currently has offers from Arizona, Arizona State, Michigan, Nebraska, Ohio State, Utah, UCLA and Oregon State.

“I am working a lot on the mental aspect of the game since I have only been playing for two years,” said Andrews when asked about where he is looking to improve this summer.

Allen and Andrews believe everyone can expect big things out of the Wolves this season. As for the two of them together could we see an Aikman-Irvin type tandem?

“That’s what we are going for!” said Allen.