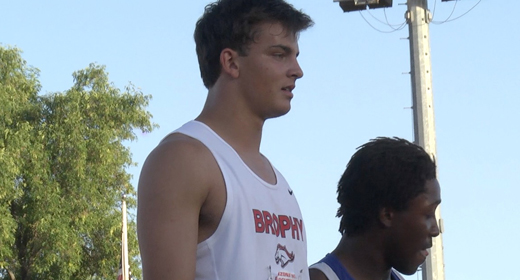 Devon Allen had a remarkable junior year in track and field setting state records in the 110 and 300 meter hurdle events, both of which he won the state title and came a combined two one-hundreds of a second of being the state title holder in the 100 and 200 meters as well.

A week ago, Allen took his all-state speed to an international competition, representing the country in the Caribbean Scholastic Invitational in Puerto Rico where he saw the same success we have been accustomed to seeing in Arizona.

Allen accomplished all of that despite getting sick while on the trip. Those times that he has run are second in the nation in the 110 hurdles by just one hundredth of a second behind number one.

He has also qualified for the Olympic B standard for this summer’s games in London. His time of 20.75 in the 200 meters which he ran in the events state championship got him in that standing and could possibly land him in the Olympic trials in Eugene. Currently the A standard for the 200 meters is 20.55 seconds. Regardless of Allen makes it that far this year, or four years from now, having success as an Olympic athlete as well as a football player combine into his ultimate goals.

“The chance to go for a gold medal and maybe a Super Bowl ring, that’s one of my dreams, something me and my Dad talk about so that would be cool,” said Allen.

Having a lot going on currently in the track world has allowed for any time looking into the upwards of 30 offers he has from division one schools for football. But Allen does already know what he will be looking for in a school to help him make a decision.

“Somewhere I can love the place I am going to school and also a good football program, track program and a good education,” Allen stated. “Somewhere hopefully close to home where I am not too far from my family so they can go to my football games and my track meets.”

Devon Allen is becoming more known by the day in Arizona because of his great play for Brophy on the football field and his record setting speed on the track. But there are things most people don’t know about the star in the making.

“My love for music,” Allen answered when asked about a little known fact about him. “I am learning the piano now and played the saxophone for years. I’m into leaning new instruments so I could pick up the guitar soon.”

One of the first songs Allen has picked up on with the Piano, a Disney favorite, “A whole new world” from Aladdin. Could directly correlate with the what he could have in front of him as competition in the near future. The whole world.