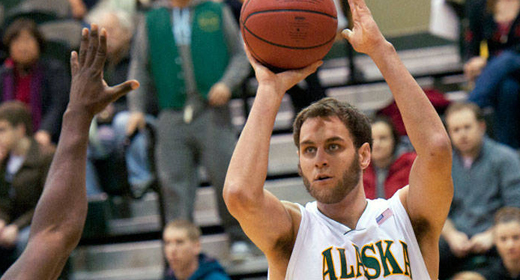 Those who have watched Taylor Rohde at all points in his basketball career knew he had it in him.

Now after a standout senior season at the University of Alaska-Anchorage, Rohde was named the Division II Player of the Year and will be playing professional basketball next season.

But it took a few bumps in the road to get to this point.

In his senior season, Rohde was named the Gatorade Arizona High School Player of the Year in 2007-08 season after averaging close to 30 points and 12 rebounds in his fourth full season on the varsity basketball team at Pinnacle High School. The great four years earned him a scholarship down the road to play ball for Herb Sendek at Arizona State University.

But Rohde’s stint with ASU did not last as he played only 46 games in two seasons and did not seem to be able to play his game in the Sun Devil’s system. Despite winning the team’s “Iron Man” award for most charges taken in his sophomore season, Rohde decided to part ASU for Alaska-Anchorage.

“Leaving ASU my confidence level was low,” explained Rohde. “Going up to Alaska-Anchorage and knowing I had a clean slate really rose my confidence a little bit. I knew I could actually play my game and be as successful as I could be.”

That confidence rose fast as he went on to lead the Great Northwest Atlantic conference in scoring with 19.8 points, shooting percentage of 62.7% and double doubles with 9 in his senior season. Numbers that landed him the title of consensus All-American and National Player of the year in Division II after leading his Seawolves to a 23-7 record.

“The last year, could not have gone out on a better note,” Rohde mentioned. “I wish we would have gone a little further in the tournament but looking back, I am going to remember it for the rest of my life.”

Now as his collegiate career has come to an end, the 6-9, 255 pound center has already received offer’s from European professional teams for his services in the post. Teams have called from Spain, the Czech Republic, Germany, Croatia and Iceland.

Rohde and his agent are also in contact with some teams in this country as well.

“I am in talks with some NBA teams,” Rohde said. “Just trying to get in, get a try out, maybe some pre-draft camp and summer league camps and all that stuff. But if that doesn’t work out, European league is probably going to be where I end up.”

A lot of hard work and perseverance will now make the coming months very exciting for Tayor Rohde as his All-Nation level of play should in turn land him the opportunity to play the sport he has loved his whole life for living.