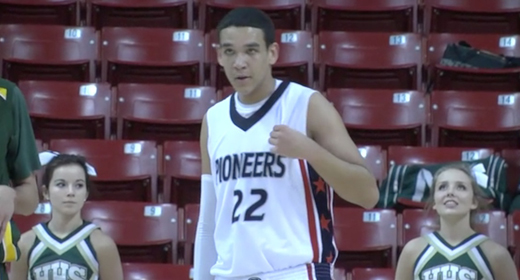 Only 117 High School basketball players from around the country were selected to the Nike Elite 100 Camp at the University of St. Louis in St. Louis, Missouri over the weekend. Only ten of which came from the west coast and two, Dorian Pickens from Pinnacle and Payton Dastrup from Mountain View, represented the state of Arizona.

It was an experience for Pickens that was once in a lifetime.

“It was a great opportunity to get exposed to a lot of the great players around the country,” said Pickens. “I got to go up against great competition, there is nothing more I could ask for.”

Pickens, along with other high school underclassmen in attendance, received training from some of the best instructors the game has to offer, learning what it takes to be able to succeed at the next level both on the court and off.

“We did a lot of leadership training and community work as well as leaning some stuff about once we get into college how to manage our finances and financially budget our time,” Pickens explained.

Pickens also got the opportunity to meet some college recruiters at the camp which could help pass along a good word to coaches. Pickens already has many offers just after two high school seasons. Some of those offers include Arizona, Indiana, Syracuse, Boston College, California, USC and others all around the country.

One of the biggest take aways Pickens had with this experience was the opportunity to learn how to conduct yourself while continuing to compete at the highest level.

“I just learned to go 100 percent all the time,” Pickens mentioned. “There is always people watching even when your off the court so it’s always important to be on your best behavior because you are in the eyes of the public at all times.”

Based on Pickens’ performance in St. Louis, he could possibly get an invite to the Lebron James Skill Academy in Las Vegas from July 6-9; he will learn if he is one of them very soon.

One thing is for certain, Pickens will look to help lead his Pinnacle Pioneers back to another deep run into the playoffs next season.