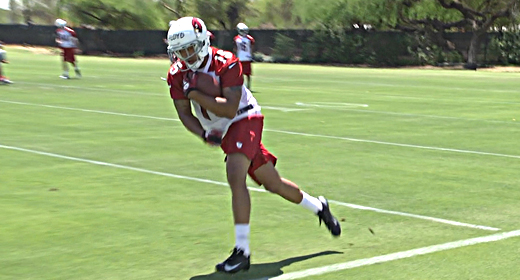 Wide receiver Michael Floyd has experienced quite a bit since hearing his name called by NFL Commissioner Roger Goodell at the NFL Draft back in April.

Since coming to the Cardinals, he’s taken part in rookie minicamp, OTAs and now he’s in the midst of another minicamp.

Oh…did I mention he also signed a five-year contract with the team?

Quite a lot for a 22-year old to go through?

From what I’ve seen from Floyd day-in-and-day-out during it all, he’s doing quite well considering the weight that’s on his shoulders.

Whisenhunt would tend to concur with my last statement.

“As far as his attention to detail, not wanting to come off the field, I’m very pleased with him,” Whisenhunt said. “I’m looking forward to him having a really exciting camp for us.”

Floyd says he’s taking it all in stride, grinding day-by-day.

“It feels good, I’m learning as we go,” Floyd said. “I’m getting better at all the things, making sure I don’t have mental errors and doing the best I can.”