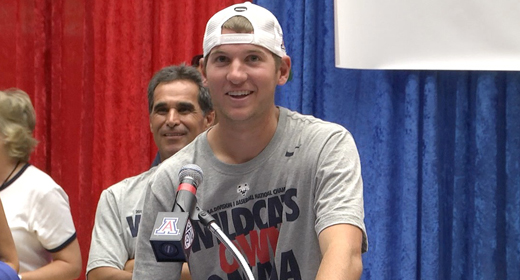 Konner Wade couldn’t have scripted it any better.

The lanky 6’3 sophomore starting pitcher for the University of Arizona had already done his work in Omaha, tossing back-to-back complete games as he watched from the dugout Monday night as UofA beat South Carolina to claim their first College World Series Championship since 1986.

“It’s feels great to bring this city another championship, it’s been 26 years,” Wade told Pros2Preps.com on Monday in Tucson moments after the ‘Cats victory celebration at the McKale Center. “The people here are awesome and they love UofA. I couldn’t ask for anything more.”

Wildcat fans certainly couldn’t ask much more from the former Scottsdale Chaparral star either as he helped anchor head coach Andy Lopez’s staff all post-season as Arizona went 9-0 in the post-season. Lopez said it wasn’t a case of not trusting his bullpen, he just didn’t need to rely on it the way Wade, Kurt Heyer, and James Farris performed on the hill.

For Wade, his approach was simple.

“I just wanted to throw strikes,” Wade explained. “I know I have good movement. It’s tough to barrel up when you throw strikes, especially when you’re ahead in the count. You’re going to get ground balls and get outs.”

In reality, his post-season approach didn’t change much from the regular season as Wade walked just 37 batters in over 136 inning pitched. He struck out 105 and only threw one wild pitch.

Wade believes there’s no reason UofA can’t do it all over again next summer.

“Let’s get back there next year,” Wade said. “We’ve got some good guys coming back and I think we got a shot to have a good team.”