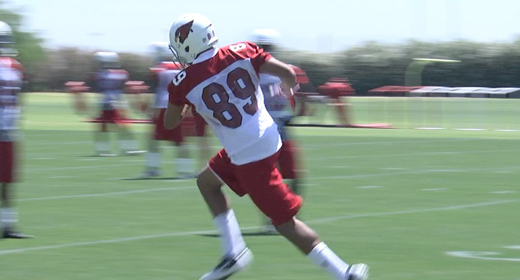 Many of Arizona’s own are out on the practice field at OTA’s for the Arizona Cardinals. One of which is former Glendale Community College Gaucho and Arizona Wildcat wide receiver, Gino Crump.

“It is very exciting!” said Crump at the Cardinals training facility. “On top of the fact that I get to stay in the state of Arizona is icing on the cake.”

Crump, who made a name for himself with the Wildcats the last three years since transferring to U of A in 2009, played in all twelve games last season with over 600 yards receiving and two touchdowns. Playing with Nick Foles got Crump used to a pro-style quarterback. Which is something he is hoping to take advantage of at OTAs.

“Coming from U of A we ran a whole lot of different packages and I got to see a lot of different things that can definitely help me on this level,” Crump explained. “I am happy that I got a chance to spend a lot of time down there with the coaches I was with and they taught me a lot so its definitely benefiting me.”

Crump is getting a great opportunity with the Cardinals, mostly because he is getting to work side by side with one of the best in the game, Larry Fitzgerald.

“I am just soaking it all in,” said Crump. “He is a funny guy, a cool guy to be around and I just try to study what he is doing, pick up from the things he does well and try to mimic that a little bit when I get my opportunities.”

Crump, who grew up in Washington, D.C., has taken his football abilities to the next level in Arizona, and he intendes to give it his all to those in this state that have given so much to him.

“I am going to do my best to hold it down for the state of Arizona,” Crump stated. “They have given me a lot from junior college, to DI, to the pro’s so I owe it to the state to come out and give it my all so I am going to give it my best.”

Cardinals wrap up OTA’s this week before mini-camp kicks off next week at the Cardinals facility in Tempe.

@spurge_ @Sports360AZ I think you might need to correct his statement in the article as well... https://t.co/WaHvb8nLEb
View on Twitter