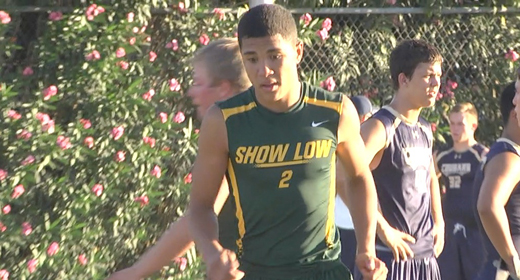 For the last four years the Show Low Cougars have had one of the top athletes in the state lead them to great success both on the football field and on the track in Josh Weeks. With Weeks now graduated and eventually off to what expects to be a successful career at BYU, a new potential star is waiting in the wings, incoming freshman, Quentin Clark.

“I play basketball, football, baseball and track,” Clark explained when asked what sports he will be going out for while in school. “But I am going to do track this year instead of baseball.”

It is not often that a freshman can come to a high school and play for a varsity football team. Especially a juggernaut in the Division III like Show Low.

But that is going to be the case for Clark.

It is Clark’s above average speed and and size for his age that has Show Low head football coach Randy Ricedorf planning to have Clark play varsity on the gridiron right away.

Clark will also turn some heads on the track. As an eighth grader he broke twelve seconds in the 100 meters, which was among the fastest in his age bracket in the state.

The freshman has someone near and dear to him that he models his game after. That someone is his Uncle Derek Giger who is a very familiar name up in Show Low. Giger is currently walking on at ASU.

“My Uncle Derek, he is my role model,” Clark mentioned. “I have looked up to him since I was three.”

“He (Derek Giger) may love the game more than anyone I’ve ever coached,” Coach Ricedorf added. “He is exactly what Coach Graham is looking for on and off the field, he just doesnt know it yet. If Quentin has half the commitment and work ethic Derek has, he will be a name remembered like Derek for along time.”

Clark is going to have the opportunity to put his stamp on the Show Low community right off the bat as a freshman. Only time will tell how his four years will be remembered.