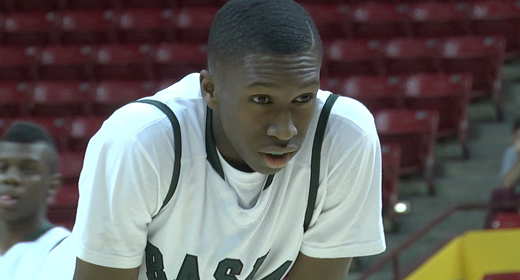 One of the most exciting and athletic high school basketball players in Arizona is senior Jaron Hopkins.

Last season as a member of a Basha Bears team which was ranked toward the top in the state all season, Hopkins led the team in scoring averaging more than 21 points per game.

But his senior season will bring a lot of change as he, along with his cousin Torren Jones, have transferred to Dobson High School.

“My Dad moved and he had to get closer to work so that’s why Dobson,” explained Hopkins. “Things are going good over there. We are winning games and later on in the season  things will click after practices and be title contenders.”

The Mustangs will be title contenders with Hopkins joining junior and ASU commit Kodi Justice in the back court. And even though he has only played with his new team for a short time, Hopkins can see where he will fit in.

“We move the ball really well,” Hopkins mentioned. “A lot of guys can shoot so it will be good for me because I can penetrate and kick and things like that.”

Hopkins is getting a lot of Division I attention, especially after his great junior season. The schools giving him the most attention are Arizona, USC, Penn State, Pennsylvania, Colorado, Washington State and Auburn. And Hopkins says he knows what he is looking for in a school that will aid in his decision.

“I am looking for a team where I can come in and contribute right away,” said Hopkins. “Not have to wait until later down the road during my sophomore, junior and senior years. I would like to be able to participate right away.”

Since it is Hopkins’ last year at the high school level, there is only one thing on his mind.

“My biggest goal is to win state,” Hopkins explained. “I’ve always wanted to win state, I’ve dreamed of it. I watched last year Corona win it and it just motivated me a little more.”

This summer, Hopkins traveled to Las Vegas to train with NBA shooting coach Ivorie Manning. Former Sun Devil Trent Lockett was also in attendance for the workouts. Manning works with NBA players such as Ty Lawson and Raymond Felton. For the rest of the summer, Hopkins is working on his ball handling and shooting, as well as his strength and leaping ability this summer before the start of his senior year with the Dobson Mustangs.