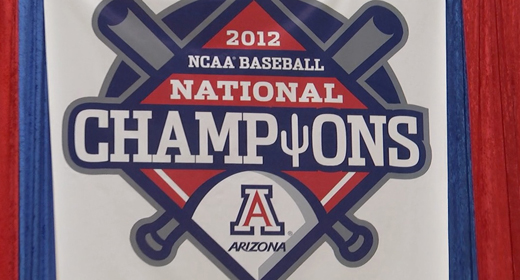 For the first time since 1986, the Arizona Wildcats are national champions of college baseball after sweeping the two-time defending champion South Carolina Game Cocks on Monday.

During the Wildcats championship run, they went undefeated through the regionals, super-regionals and College World Series games. In fact while in Omaha for the CWS, they did not trail at any point in any game.

“You’re the eight hottest teams in America,” explained Arizona Head Coach Andy Lopez. “One of them is going to get real hot for two weeks and this year it was Arizona.”

“I’m so proud of this team,” Arizona Athletic Director Greg Byrne stated. “The way they led with the junior and senior leadership. The way they believed in themselves and continued to get better an develop throughout the year.”

On Tuesday, the Wildcats returned to Tucson and took a bus right from the airport to McKale Center where over 5,000 proud fans who packed the north end of the Arena were there to welcome them. And the cheering, chants and speeches lasted over 40 minutes. Something that Andy Lopez wasn’t expecting.

“I apologize, I told my wife ‘oh there will be about a thousand people, we will be there for a little bit and then we will go and get something to eat,'” Lopez said. “I am a little off track now. I’m a little off schedule with my wife.”

In attendance along with the many fans was former Arizona baseball coaching legend Jerry Kindell, members of the Arizona basketball team and new head football coach Rich Rodriguez.

“I wish I was there in person but I was glued to the television. My son and I watched the whole thing” mentioned Rodriguez. “Coach Lopez set the bar pretty high, we will do all we can to beat that.”

Before the season, Lopez was excited about the potential that moving to Hi Corbett Field could be for their program. Little did he know that the highest potential would be there after one season.

“I don’t think we are in Omaha without being at Hi Corbett,” explained Lopez. “You get to Hi Corbett and if you get hot, you stay hot and that’s the beauty of it.

Plenty of smiles and laughs were shared as well. Especially after all-conference pitcher Kurt Heyer mimicked Greg Byrne and Andy Lopez in front of all of the fans in attendance.

In the end, the National Championship is something the baseball program hopes to continue to build on moving forward and intends to “own Omaha,” like it says on their championship shirts, again next season.

“I told our guys that every team in college baseball is going to end with a loss except for one,” Lopez added. “This year it was Arizona and that’s pretty sweet!”

‘Cats cruising in Omaha at CWS