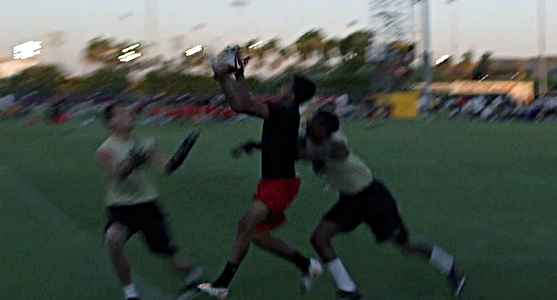 The biggest news of the week is the expected commitment of Brophy QB Tyler Bruggman. Looks like he is down to Arizona State and Washington State. My gut says he would like to stay at home but is unsure of how he fits in the new offense. Which us the plus for him at WSU. He likes Leach’s offense but how will he like Pullman in December?

One player that did make his commitment was Salpointe LB Carlos Carroll. He pledged to SMU and June Jones on an unofficial visit last weekend. SMU doesn’t recruit much in Arizona but Salpointe head coach Dennis Bene has some ties with Jones. He has sent him a QB when he was at Hawaii and an DE to SMU.

Who says passing leagues are worthless? Tell that to wide receivers Paul Elvira from Marcos de Niza and Nate Phillips from Basha. Both were offered by Arizona at the UofA’s tournament last weekend. It is the first offer for Elvira and fourth offer for Phillips but first at the BCS level.