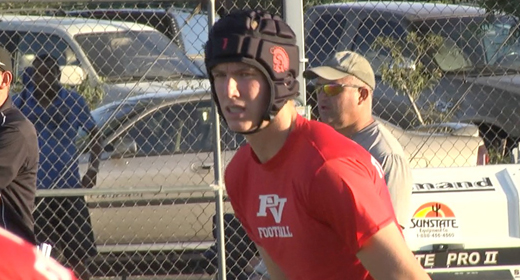 The Boise State Broncos have been known for their high octane offense over the years. Especially because of the play at the quarterback position, most recently from Heisman candidate Kellen Moore.

What could be one of the next in line to take over as the leader in the Broncos offensive huddle, is Paradise Valley senior quarterback Ryan Finley who is committed to Boise State after high school.

“Coach Peterson being a great coach, I just can’t wait to be a part of the program,” Finley stated. “I’ve been up there three or four times, I really like it up there, the atmosphere is all about football and I definitely think it’s the place for me.”

It is that high octane offense that has Finley so excited to depart for Boise State and be a part of the future of their program.

“That was something that really intrigued me,” explained Finley. “To be a part of that success, that quarterback mentality that Boise puts out every year. Definitely that’s what I’m psyched about.”

But before Finley goes anywhere, he has a senior year to play out with the PV Trojans. They were 4-6 a year ago despite Finley throwing for almost 3,000 yards and 25 touchdowns to just seven interceptions. Behind the leadership of Finley the Trojans look to improve past that mark this up-coming season.

“I’m just trying to get these guys to rally behind me and keep being a leader,” Finley mentioned.

This summer, Finley is working hard to fine tune his game in order to continue to improve before taking his game to the next level.

“I’ve definitely been trying to gain weight, I’ve gained already like eight or nine pounds,” said Finley. “Also stuff with my mechanics. I think my release is really good but just focus on stepping into my throws. Just practice all those skills before I get to Boise.”

The Finley led Trojans continue passing league tournaments and summer work outs until the end of June, before taking a month off leading up to the start of camp in August.

Sports360AZ Retweeted · Brad Cesmat
@bradcesmat
Pac-12 power ratings: What happens when you have a collection of good teams? Big games, that’s what - https://t.co/ScFQluiOdN via @sports360az @wilnerhotline
View on Twitter
1
0