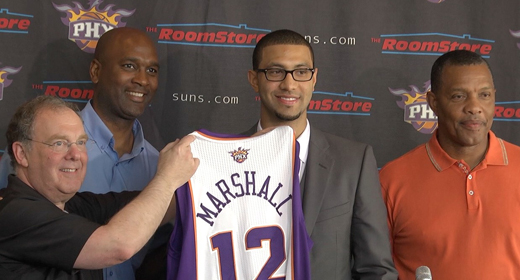 According to Dictionary.com, cerebral is defined as involving intelligence rather than emotion or instinct.

Minus the emotion part, that definition could be used as defining the Phoenix Suns 13th overall pick, Kendall Marshall. As fans as well as critics have toted Marshall to be a “traditional” or old school” point guard, Marshall himself would agree that that sums up his game.

“I feel like I am a very cerebral point guard,” said Marshall when being introduced by the Suns for the first time in Phoenix on Friday. “I guess that is where the traditional point guard phrase comes from. I just try to make the most of the abilities that I have and try to contribute to whatever situation I’m put into.”

The pass first mentality that Kendall Marshall prides himself on is something that has not been seen out from the elite point guards in the league over the last several seasons. Players like Derrick Rose and Russell Westbrook are the cream of the crop these days and both pride themselves on their athleticism and ability to score.  Though that is not Marshall’s game, he as well as the Suns believe he brings something special to the organization.

“I think it’s all about what the team needs,” explained Marshall when asked about his more old school style of play at the position. “Hopefully what I am able to bring to the table for the Phoenix Suns will make us successful.”

“We did not get Kendall for his athleticism,” said Suns general manager Lance Blanks after selecting the point guard. “We got him for his brain, his ability to make people better, who he is off the court for our locker room. He is in perfect alignment as who we want to be as people and an organization.”

“I think all of the Phoenix Suns fans have seen what Steve Nash has done over the years for us and shown what a throwback point guard does and this guy (Marshall) is very similar,” said Treloar. “He makes his teammates better. When he took over as a starting point guard for North Carolina from the Drew kid, that’s when their success really started.”

Treloar mentioned that name that forces people to perk their heads up these days. Steve Nash. And Marshall himself mentioned Nash by name as someone who he will try to model his game after.

“I feel like I have a very unique game,” mentioned Marshall. “There are players such as Steve Nash the way he uses pick-and-roll’s and the bounce pass. I may try to steal things from his game.”

With the Suns drafting a point guard, it raises even more question to whether or not the two-time MVP Nash will return to Phoenix next season. Marshall expressed that he will be ready and is looking forward to being a member of the organization whether or not that is the case.

“I am just excited about the opportunity to be playing at this level,” said Marshall. “If he is here, it would be someone tremendous to learn from both on and off the court. But that is out of my control. And he is not here, I feel like there are a lot of other veterans I can learn from.”

Just like that, the draft is over and now very quickly comes the start of free agency. That officially gets underway at 9:00 pm local time on June 30th.