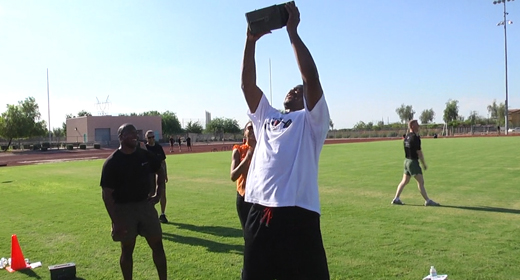 Even though I had to get up at the crack of dawn today, the event I covered was well worth it.

I got to hang out with my fellow Marines and Cardinals DE Calais Campbell at Skyline High School, as Calais took part in some training with them and 51 applicants who are striving to earn the title of “United States Marine.”

I really applaud Calais for two reasons: 1.) He volunteered for this “mission,” and 2.) He did as many exercises as he could, considering he was under the weather.

I talked to Calais in-between exercise stations, and he told me that he liked what he saw from the Marines and the applicants. The “strict” nature of how things ran really impressed him.

For those of you that workout, you might think that lifting 30 pounds over your head is easy, but try lifting it in a steel ammo can over 110 times, which is what Calais did!

That was a truly impressive site, but what impressed me more was the effort and desire from the 51 who are trying to be one of “The Few, The Proud.”

When I looked at them and how hard they were working, I couldn’t help but flash back to the year 1989.

I graduated high school in Harrisburg, Pa., and two weeks later, I was at the Marine Corps Recruit Depot, Parris Island, S.C., for Boot Camp.

Should all 51 make it that far, they are in for an experience like no other!

I really hope that Calais got something out of the training, and takes it back to his team. I know it’ll benefit them greatly.

After all, it’s worked for us for 237 years. It should work for the Cardinals.