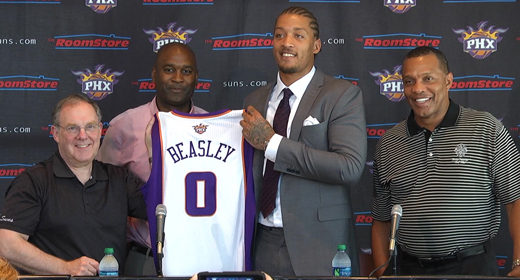 Michael Beasley is a pure basketball talent, through and through, otherwise he wouldn’t have lasted as long as he has in the NBA.

Anyone who’s a passing fan of the league knows that Beasley hasn’t been squeaky clean off the court (most fans would say his sneakers haven’t squeaked much when he’s on the court either).

Beasley has had major issues with marijuana ever since he came in the league with the Miami Heat back in 2008. It got to the point where Beasley reportedly checked himself into a rehab center in Houston, Texas, in August 2009. Reports say Beasley was receiving counseling for stress-related issues.

The point to all this is that Beasley, like all of us, has faults, and isn’t perfect. The problem is that a good majority of our slip-ups and mistakes aren’t broadcast on Twitter, Facebook and ESPN, like Beasley’s infractions have been.

That’s the price you pay for being in the public eye 24/7.

Despite his checkered past, Beasley is idolized by NBA fans across the world, because he is an incredible basketball player, and now Suns fans get to see him up close and personal, because he’s now a member of the Suns roster.

Beasley recently signed a multi-year contract with the team, and general manager Lance Blanks couldn’t be happier to have him here in Phoenix.

“He [Beasley] loves to play basketball, and that’s something you don’t see a lot of,” Blanks said. “Like a kid, he has the spirit of a kid, and I personally hope that’s infectious.”

Blanks says the organization is going to “love him and put [their] arms around” Beasley, to help him be the best player he can be.

“We aren’t afraid of what he’s experienced, we want to embrace that,” Blanks said. “We need talented players as we move info the new era for the organization.”

Beasley says the Suns were the “first and only team” he met with during the summer, which made the deal that much easier to pull off.

Beasley’s excited about the new beginning and he’s ready to show Suns fans what he can do.

“I just want to win,” Beasley said. “I’m going to lead through example. From the first minute to the last, I’m gonna work hard and do what I have to do for this team to win.”

Beasley has a simple way of staying out of trouble: he says he “stays in the house.”

He says he works out from 6 am – 4 pm, and by the time he’s done with his routine, he just wants to go to sleep.

Beasley says his routine is like this: he runs on a track for 60-90 minutes, then he does some martial arts work, some yoga, some ballet stretching then some court work.

Wouldn’t you be tired after all of that work?

Beasley seems like a bright young man who just needs the right people surrounding him to keep him focused on what he needs to do and he will be just fine.

“He wants to be a complete basketball player,” head coach Alvin Gentry said. “Not known for just his scoring, but for his defense and rebounding, and as a coach that gets you excited.”