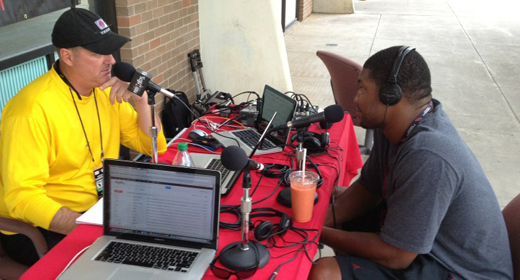 It’s been a summer to remember for Cardinals defensive end Calais Campbell.

In early May the franchise awarded Campbell with a 5-year, $55 million deal keeping the free agent in Arizona for the prime of his career. Thirty-one million dollars of the contract is guaranteed and the 25-year old will get over $30 million of that in the first two years of the deal.

The always humble Campbell is taking everything in stride.

“This is a dream come true,” he told Brad Cesmat Thursday on ‘Big Guy on Sports.’ “I’m just enjoying it, every moment of it. Living the dream is something everybody wants to do, but few can so for me I’m just going to capture the moment and capitalize on it. If I could play for 15 years, that would be awesome.”

After signing the new deal and in-between attending the Cards off-season organized team activities, Campbell was busy traveling from destinations as widespread as Hollywood to Nigeria. He directed a short film at Universal Studios and did other behind-the-scenes work. He also helped others in need when he and teammate Sam Acho made the trip to Africa.

“It was a medical mission trip,” Campbell explained to Cesmat. ” They [Sam Acho’s family] bring out a bunch of doctors and they give away free medical treatment to anyone in need at the villages. My personal job was to carry people on the stretcher from the surgery room to the post-op room. The fact that the people were getting [treated] was huge for them.”

Now his focus is all football as the Red Birds are in Flagstaff preparing for the upcoming season. Campbell is hoping to build on his 72-tackle, eight-sack season a year ago and feels the skies the limit for the Red Birds young, improving defense.

“Our defense is so special,” he said. “I feel we have a lot more depth this year than we did last year and we feel like everybody’s bought into the scheme. I think we can be special.”

The Cardinals open the pre-season August 5 against the Saints in Canton, Ohio.