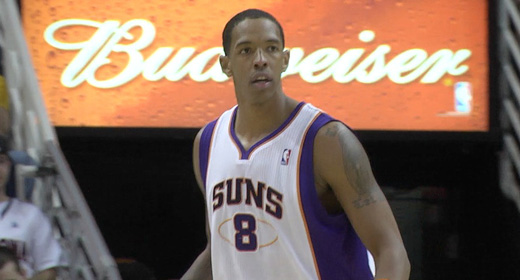 There were a lot of fireworks on the fourth of July. Not just in the sky, but coming from the Phoenix Suns front office as many different moves were made to the roster as both additions, as well as subtractions.

After news came down that the Suns had dealt former face of the franchise, Steve Nash to the Lakers in a sign-and-trade bringing the team four draft picks, Michael Beasley and Goran Dragic were both signed to the team later Wednesday night.

Mixed emotions have resulted in all the changes made to the Suns roster around the Valley. But Phoenix Suns forward Channing Frye likes the additions that have been made that undoubtedly bring change but also promise. And pushes him into a new role on this team that he is ready to embrace.

“I think a lot of people are doubting us,” Suns forward Channing Frye told ‘Big Guy on Sports’ on Thursday. “It sounds funny but the guys who have been here the longest, Robin (Lopez), Jared (Dudley) and myself, really need to step up our game and make sure the guys on the team now know that this is no off year.”

Goran Dragic is being re-united to the team that originally brought him into the NBA. After struggling with the team off the bench in his final half season with the Suns, Dragic found his confidence again with the Houston Rockets which in turn has landed himself a four year, $30 million contract to return to his old team.

“You’re bringing in arguably one of the best free agents out there at the point guard position,” Frye explained about Dragic re-joining the team. “He is really going to help us out.”

A new face brought into the fold is former number two overall pick and a member of the Minnesota Timberwolves the last two seasons, Michael Beasley. The Suns signed him to a three year, $18 million deal. A player Frye is excited to have as part of the team.

“I’ve got to say Michael Beasley is a great talent,” said Frye. “He brings kind of that wildcard. He can play different positions, he is a prolific scorer. I think he still needed the chance to be around some quality guys that will allow him to play and develop and show everybody his skills. He is a great edition to our team.”

Frye also expressed his approval of the Suns’ one and only draft pick, Kendall Marshall out of the University of North Carolina.

“Kendall Marshall is, I would say the best point guard to come out of this draft. The truest point guard,” explained Frye. “Anybody saying ‘Oh he cant shoot’ should look at everybody who’ve they said cant shoot. You look at guys like Rondo, Russell Westbrook when he first came out, you look at Chris Paul. Now they have developed jump shots and they are some of the best point guards in the league.”

Despite being excited about the additions made to his team, Frye knows the biggest change of all will be how he and the rest of the Suns adjust to a roster without the two-time MVP Steve Nash, who is now on his way to Los Angeles. Frye thinks it will be odd seeing him in a Lakers uniform but it will not matter once the ball is tipped.

“I respect his decision,” Frye mentioned. “I respect him as a man, as a player and as a teammate. It was a tough decision, he’s been with the Suns for so long….you just have to give him the respect he deserves.”

Frye knows how much Nash has meant to the Suns organization and to his own career personally. He was just a bench player in Portland trying to find his way before coming to Phoenix and along with Nash, learned how he can be successful in the league. But with mixed emotions now with Nash gone, Frye directed a message right to the Suns faithful.

“We are still going to be the Suns with or without Steve and we need the fans to understand that we are now a younger team,” said Fyre. “We still need them to come out and make the place as loud as it can be.”

For Frye personally, it is has been and will continue to be an off-season full of work. He is rehabbing his surgically repaired shoulder which forced him to miss the last few games of the 2011-12 season.

“It feels great,” Frye explained. “It’s been a tedious process I will tell you that. I just learned to slow down and more or less learn to re-use my arm…I definitely plan to be there at the beginning of the season.”

The Suns will need a healthy Channing Frye once the team gets back together for the 2012-13 season. His leadership on and off the floor will be important in the teams attempt to push thorough life after Nash.