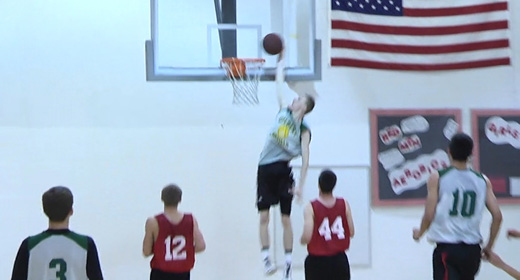 In his first season as head coach of the Gilbert Christian Knights, Jerome Joseph took his team to the Division III state championship.

What a way to start off his career in Gilbert, Ariz., huh?

The team won 27 games last season, including 18 straight to end it.

The team lost two starters – C/PF Connor Patterson and PG Logan Fougnies – but the other three – SG Dylan Bliss, SG Sam Jones and SG Roberto Reyes are back and they’re ready to run for the trophy again.

Obviously, when teams lose players, roster spots open up, and Coach Joseph has filled  the two holes with freshmen bodies, which puts even more of an onus on the upperclassmen to be more active on the team.

“It’s going to be tougher,” Joseph said. “With my three returners, they’re going to have more responsibility to lead the team, not only in scoring and ability, but more of a leader and a role model.”

Bliss has heeded the call of his head coach, and is ready to take on that leadership role.

“I love the little guys,” Bliss said. “They’re going to be good, they just have to step it up.”

Bliss has taken stock in his game, and knows that as one of the leaders on the team, he has to tighten some things up personally, if he wants to be a better player.

Bliss says he’s gotten interest from some Division I and Division II schools, such as the University of Nebraska at Omaha, Cal Baptist University and Point Loma Nazarene University, so the future looks very bright for Bliss.

But before Bliss can hit the future, he and his teammates have to focus on the present, and the present is attempting to repeat as Division III state champs, which Reyes thinks they can do.

“Definitely,” Reyes said. “We have the three main returners coming, and we bring a lot of experience and poise to this team, so I think we will be good.”