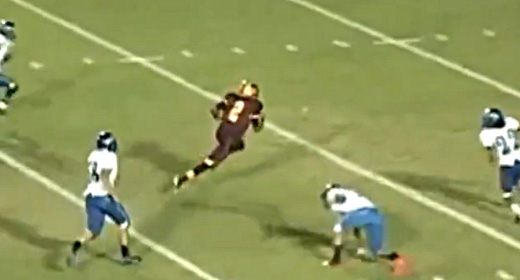 How major was he? Out of 73 total completions by Pride quarterbacks Caleb Buck and Dillan Johnson, 37 of those went to Brown. Also, other than Brown, no other receiver had double-digit catches over the course of the season.

Brown is headed into his junior season with the Pride, with fans of the team looking for even more from him.

Brown says he learned a lot of things last season that he and his teammates can apply to this coming season.

“I learned that we have to come together and become a team, more of a family, not become selfish players and work together to get more wins,” Brown said.

Brown says a positive about the team is that a great majority of the players are already familiar with each other, which should make things a bit easier.

“We’re all based around each other and we have a good camaraderie with each other this year,” Brown said.

Brown plays both sides of the ball for the Pride. He’s also a defensive back. Brown totaled 29 tackles and two interceptions last season.

“At the beginning it was a little difficult, but then I’ve gotten used to it and adjusted,” Brown said.

Brown is an extreme talent on the football field, and what comes along with that talent? Major interest from next level schools, including the University of Arizona, Arizona State University, University of Florida and USC.

Brown – who wants to major in business – knows exactly what he wants from his college experience.

“I’m looking for someone to take care of me as a person and a man,” Brown said. “If I don’t go pursue a sport, [I’ll] find a different path to go.”