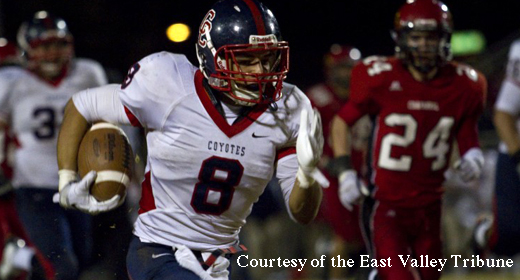 If you saw Jalen Ortiz play last season, and got him mixed up with Clark Kent, don’t worry, I’m sure lots of others did too, because it seemed like he could do it all on the football field.

Ortiz had a monster junior season for the Centennial Coyotes: on the ground, he had 1187 yards rushing and 14 touchdowns.

When he wasn’t rushing for daylight, Ortiz was a pretty productive receiver as well, hauling in 14 catches for 340 yards and six touchdowns.

It doesn’t stop there: Ortiz also played defense as well (cornerback to be exact), and had 20 tackles and one interception.

No wonder colleges are falling all over themselves for this young man. The Sun Devils, Wildcats and Lumberjacks all want him to stay local and play for them, while teams like USC, Boise State and Stanford are trying to yank him over on their respective rosters.

This young man is the real deal (type the name Jalen Ortiz in YouTube and you can see his body of work, and boy is it stunning.).

Ortiz is a typical kid who loves to play Xbox (NCAA Football is his favorite game right now), and hang with his family and friends.

However, when he gets on the football field, Ortiz is near impossible to stop. The numbers don’t lie.

He takes his crafts (track and football) very seriously, and never stops working at perfecting them, himself and his teammates.

“We’ve been working hard as a team throughout the summer,” Ortiz said. “Lifting every day, making sure we’re running, whether it’s early in the morning or late at night.”

Look for Ortiz’s receiving numbers to jump even more this season. He says he’s going to be working in the slot more, and has been working on his “stance and start” with his receivers coach.

It’s all about honing your craft, and Ortiz understands that.

Ortiz is a very grounded young man. He doesn’t let all this attention from colleges change who he is.

“If you let it get to your head, then you’re not going to have any friends in your senior year in high school,” Ortiz said. “I want to have fun as well in my senior year, so I have to stay grounded.”

For Ortiz, athletics will continue to be an important part of his life, as he prepares to move onto the next stage in his life, but college, to him, is more than just taking to a football field, or running around a track.

“It’s going to be big on academics, and going to the campus, making sure I can see myself living there for the next four or five years,” Ortiz said.

Ortiz says he hasn’t put together a top list of schools quite yet, but he did say that he’s been in contact with coach Todd Graham and Arizona State on a number of occasions.

Ortiz says as long as the college coaches (at whichever school it turns out to be) are okay with him playing football and running track, then he’ll have no problem doing both.

Of course, Ortiz has a season to prepare for at Centennial before all that can happen, and he’s amped to get his team a state title. That would be his parting gift to them, coach Richard Taylor and the school.