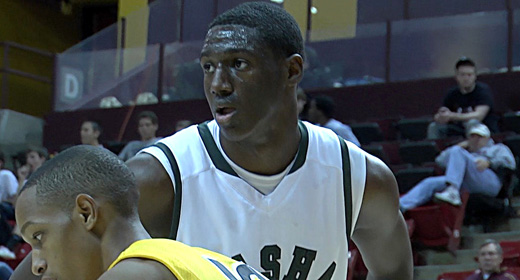 There has been quite a bit of change to the Basha High School Bears basketball program since their season ended last winter.

They hired a new coach in John Burns and also two of Arizona’s top prospects, Jaron Hopkins and Torren Jones transferred to Dobson.

But one of the things that has remained constant is senior big man Maurice Kirby will be back in a Bears uniform. Despite all of the change, Kirby is focusing on the future as opposed to the past.

Many would think that Kirby’s role would change with Hopkins and Jones no longer on the team. He will be relied upon more on scoring but doesn’t plan to change up his game too much.

“I still think I’m a pretty good passer for being a big,” explained Kirby. “But I think I am going to embrace this role pretty well. Hopefully I’ll be able to get something going and get my other teammates involved.”

Kirby so far has three college offers from Brown, Penn State and NAU and is also hearing from Tulsa, Rice and Virginia Tech. He plans to narrow his list after the summer is over. Until then, Kirby is putting in a lot of work traveling all over the country.

“Working on my individual game, 15 foot jump shots, making sure I’m attacking the basket strong, finishing and just getting my post game right.”