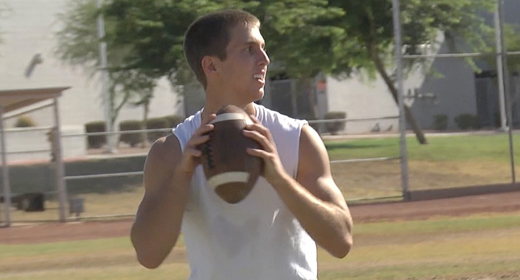 The Liberty Lions football team had one of their most successful seasons in school history in 2011 but just came up short of a state title run, losing by one point to Arcadia in the quarterfinals.

The great season was due in large part to the outstanding play of quarterback Tyler Rogers who threw for over 2400 yards and 30 touchdowns and also rushed for over 700 yards and 10 touchdowns. Rogers was banged up at the end of the season and that loss to Arcadia left a bitter taste in their mouths.

“It was definitely frustrating. We put in the most work we ever put into the program last year,” Rogers explained. “To come up short in the quarter finals was really tough. We just took their (last year’s senior class) motto this season, hard work and no regrets, and just doing that.”

This summer, Rogers and his teammates are putting in all the work necessary to build on last year. And the extra work that Rogers is putting in individually, is gaining a lot of attention.

“I am just focusing on the team and getting better,” said Rogers. “I really want that state championship this year. We came so close last year, we put in everything we got and just came up short and we’re going to try not to let that happen this year.”

“Being a leader by example,” Rogers explained. “These kids really look up to the quarterback. If you slip up they see it, if your down they see it. You’ve just got to keep a good demeanor about yourself the whole game, keep your guys encouraged and be a team leader.”

Rogers has gained interest from Utah, San Jose State, UTEP and Nevada this summer and is already pooling offers from Air Force and South Dakota State. But more could come as the 2012 season unfolds.

Though no decision has been made, Rogers has a good idea of what he will be looking for when he plays quarterback at the next level.

“My decision is going to come down to coaches relationships and programs,” Rogers mentioned. “Probably a little bit location, I don’t want to go to the east coast but I will go out of state. It’s not a problem.”