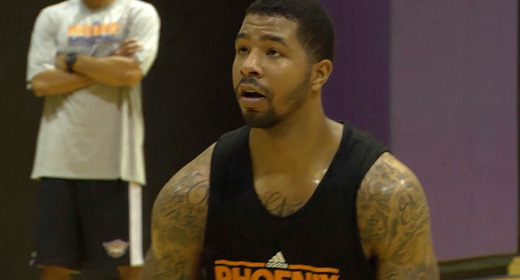 Phoenix Suns forward Markieff Morris had a solid rookie campaign. There were area’s where he thrived like three point shooting and rebounding but also areas where even he would admit he needs work.

Because of the lockout last summer, Morris was not able to participate in all NBA summer programs to help get him NBA ready. Now that Morris has a year under his belt, participating in the summer league team this off-season will allow Morris to know what areas specifically he hopes to improve.

Suns summer league head coach Dan Majerle is putting emphasis on Morris’s post play and plans to have him on the block frequently during the five game schedule in Vegas.

Another plus in the eyes of Morris and the coaching staff is the opportunity to have him and Kendall Marshall get reps together on the floor in game situations.

“With him (Morris) and Kendall (Marshall) playing together should be fun,” explained Majerle. “Those guys will get to know each other a little bit better before the regular camp starts.”

“We are doing a lot of talking and getting to know each other,” added Morris. “Trying to figure out what each of us like to do best. We just need more time and more reps together.”

Suns Head Coach Alvin Gentry pointed out at the end of last season that one of the biggest tests for young players is the transition from their rookie year to their second season. The work that Morris is putting in for this particular off-season is very important.

“He’s got a lot of work to do in a lot of areas but the potential is there. I think the desire is there and I think he will come back a much better player next year,” said Gentry after last season ended.

Morris has basically spent the entire summer in Phoenix at the US Airways Center working out with his brother Marcus Morris of the Houston Rockets. That work plus the upcoming work being put into this summer league team has Morris very eager for the start of next season.

“I’m impatient. I’m ready for it to start already,” Morris stated. “Just going to get back with my teammates. Trying to get back into the playoffs and even further next year.”

Morris and the Summer Suns have their first game from Vegas on Sunday.