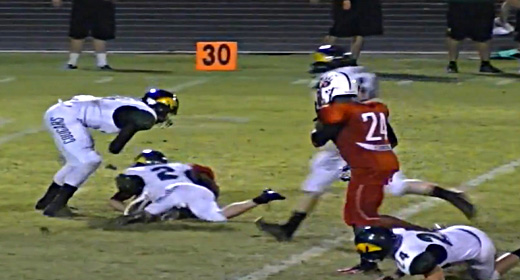 Bret Vanwinkle is heading into his junior year at Show Low High School, and he is staying busy.

Vanwinkle plays three sports at Show Low – football, basketball and track – and of the three, Vanwinkle says football is his No. 1.

“I’ve always loved it since I was a kid,” Vanwinkle said. “‘My parents would buy me a Steve Young jersey and helmet, and I’d run around in my brother’s jersey.”

Not a bad guy to admire in Steve Young…

Vanwinkle says he was a 49ers fan when he was growing up, and couldn’t explain why, other than the fact that Young was on the roster, and he was his favorite.

If there’s one thing that Vanwinkle has Young trumped in, it is the fact that he’s a two-position player for the Cougars (although you could argue that Young was just as much a running back as he was a quarterback during his career).

Vanwinkle is a wide receiver and defensive back, and considering he was a sophomore last season playing behind a guy by the name of Josh Weeks, he still managed to contribute on the offensive side just as much as he did on the defensive side.

He had six rushes for 28 yards, and 17 catches for 219 yards and three touchdowns.

Vanwinkle knows that it’s tough to lose a guy as talented as Weeks was, but he also knows that with personnel losses comes more chances to step up and shine.

“I’m just going to have to work really hard,” Vanwinkle said. “Be a good team leader and be a good example.”

Those in the White Mountains know, when it’s time for Show Low and Blue Ridge to meet in any sport, especially football, the WHOLE area pretty much shuts down and focuses on that particular game.

Vanwinkle says the rivalry is flat out insane.

“Ever since we were young, we were taught to hate Blue Ridge,” Vanwinkle said. “You get so excited to play them, it’s a crazy rivalry.”

Vanwinkle is pumped to see what will happen with this year’s version of the Cougars, after their 11-win season and state title game appearance in 2011.

“I’m excited to get playing and get hitting again,” Vanwinkle said. “I know we’re going to be really good.”

You might be wondering what a young man, who plays three sports, likes to do in his limited down time.

“I hang out with friends, go down and shoot some guns at the creek down by my house,” Vanwinkle said. “I try to play guitar and ukulele a lot.”

As far as playing sports beyond Show Low, Vanwinkle says he hasn’t gotten any offers from any colleges or universities, but he knows that he’ll attract a lot of eyes if he has a strong 2012 season.

“I’m hoping that I can show them what I got this season,” Vanwinkle said.

Anybody that can play three sports, take care of their academics and play the guitar and the ukulele is destined for success.

Impressive freshman ready for break out career at Show Low