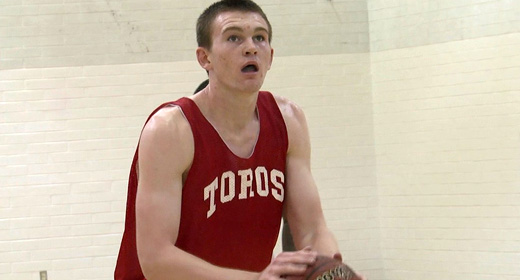 The Mesa Mountain View Toros have had one of the top basketball programs over the years with different post presences that have led the way.

Up until 2007 it was Harper Kamp leading the Toros to state title, then he went on to a solid career at the University of California. Most recently it was Camyn Boone who also led the Toros to a state championship in his junior season and is now graduated and heading to play down the road at Grand Canyon University.

The next in line, is junior, center Payton Dastrup who seems to be getting the most attention nationally of any to put on a Mountain View uniform. And he is anxious to step into his new leadership role.

“I am just trying to do the best for my team,” said Dastrup. “Make good passes, make my post moves when I need to, and just be a team player.”

Having lost Boone to graduation and also being relatively young at the guard position, Mountain View is going to need big performances from Dastrup if they want to stay one of Arizona’s elite again next season.

For Dastrup individually, he is putting in the work this summer. He, along with Dorian Pickens of Pinnacle, were the only two from Arizona invited to play in the Nike Elite 100 Camp in St. Louis back in June which for him was a valuable experience.

“It was the top going-to-be juniors and sophomores and the competition was really high,” Dastrup explained. “Good post players. Good guard play. It just really challenged me and made me a better player.”

The national exposure continues to grow and grow for Dastrup. The nation’s fifth ranked center in the 2014 class according to Scout.com currently has offers from ASU, U of A, Utah State, UC Davis, USC, Virginia and most recently from Oregon State. But is also getting attention from Ohio State, Florida, Michigan, Georgetown, Notre Dame, Oklahoma, Kansas and Kansas State as well as pretty much the rest of the PAC-12.

With all of these great programs in the mix, Dastrup has criteria that could help him narrow the playing field.

“A decent coaching staff, ability to be able to play and have good playing time,” said Dastrup. “I’d like to be maybe close to home but ultimately it comes down to whatever is the best fit for me.”