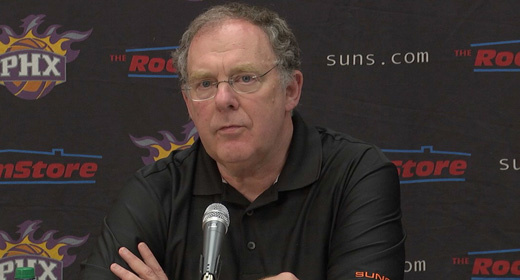 People of the Phoenix community as well as all over the nation are still getting over the shock and disgruntled feeling of Steve Nash becoming a Los Angeles Laker.

Apparently the Suns front office felt the exact same way initially about the thought of trading the face of the franchise to their biggest rival.

“It was not initiated in any way, shape or form by the Suns,” President of Basketball Operations Lon Babby explained to the media on Wednesday. “When we first heard of it we probably had the same reaction that everyone else in this room had and everyone in the community had which was a visal reaction that said no way.”

But after a lot of thought, Owner Robert Sarver challenged both Babby and Suns General Manager Lance Blanks to make the best “basketball decision” with all emotion aside despite knowing it would most likely not be a popular move in the eyes of the Suns faithful.

“As we engaged in discussions with the Lakers, I think we came away with a very satisfactory result which is four draft picks,” Babby added.

“It just became obvious that you can’t dive head-long into a transition if the thing you are transitioning from (Nash) is still here,” said Babby.

It was a difficult realization once the Suns as well as Nash got that point. Though Babby has only been with the Suns since the fall of 2010, he fully understands how much Nash meant to the organization and the community and how much it would hurt on the day the two parties had to part ways.

“So much of this franchise has been beautifully centered around his personality, his play and his contributions to the community that those are painful conclusions to ultimately reach,” Babby expressed. “But from both sides it became clearer and clearer that there was no was for us to move forward and at the same time accommodate him.”

Nash’s biggest plea for wanting to go to LA was so that he could be closer to his family. That notion was something that Babby explained should not be ignored when it is a request being made by someone who has given the franchise so much. The biggest underlining factor is that the Suns felt comfortable with the picks they brought back in return and once that was the case, Babby and the front office was glad to accept Nash’s wishes.

Everyone knew that Steve Nash would not be in a Suns uniform forever and the great seven seconds or less era was quickly coming to an end. Everyone knew that it would be a sad day once it came. The Suns organization is feeling that along with the fans. But at the end of the day, the franchise feels pleased with how things were handled and are excited about what the future will hold.

“We have now moved through a wonderful era hopefully into a bright new era,” said Babby. “We have done it with grace I think, and dignity and respect for someone who made the greatest contributions you can make to our franchise and did it without compromising our plan from a basketball perspective.”