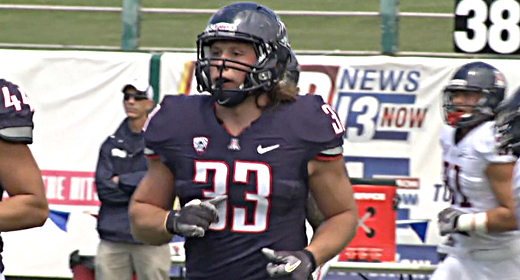 It has been a frustrating year and a half for Arizona Wildcats junior linebacker Jake Fischer.

In spring practice in 2011, Fischer sustained a knee injury that not only kept him out of the rest of spring ball, but the entire 2011 season. But after more than a year of rehab, Fischer is back to 100% and eager to get back out onto the field.

“I’m really looking forward to it. Last year I didn’t get to play at all,” said Fischer. “It left a bitter taste in my mouth but I am happy to be back.”

During his sophomore season in 2010, the 5-11 215 ponud linebacker from Oro Valley, Arizona put up very solid numbers for the Wildcats defensively. He had 58 total tackles and two sacks including games against California and Arizona State where he had seven tackles each. A presence that was definitely missed last season.

There have been plenty have changes to the Arizona program since Fischer was seen on the field last. Most people know the new head coach Rich Rodriguez as being offensive minded. But under Rodriguez, the Wildcats will bring a new defensive scheme to the field in 2012 as well. A 3-3-5 formation, which will be led by Fischer.

“You can really mess with the offense,” explained Fischer. “You don’t have one of the down lineman but you have other guys you can bring from all angles. From watching some of the old tape from West Virginia, that defense caused chaos.”

When people think of chaos in the PAC-12, they think of Oregon’s offense. But going up against coach Rodriguez’s new offense in Tucson, the defense should benefit from going up against a similar type of offense as Oregon everyday in practice.

“They (Wildcats offense) do the exact same thing in practice,” mentioned Fischer when comparing the Wildcats offense to Oregon’s. “It is definitely going to prepare us to at least be able to contain their offense…It gives us the opportunity to know what to do out there and know what to expect, we’re going to be in great shape to be able to compete against them…That’s good for us.”

Fischer as well as the rest of his teammates are embracing the new culture and leadership of the Wildcats program. However none of them are choosing to forget the disappointment of last season.

“Priority number one, I just want to win games,” Fischer stated. “Matt (Scott) and I are the same as is our whole team. It left a bitter taste in our mouth from last year and we really just want to get Arizona back on the map.”

Wildcats report to camp to kick off their 2012 season on Wednesday August 1st in Tucson.