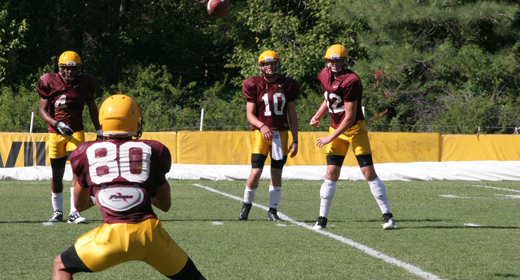 So much emphasis has been placed on head coach Todd Graham finding a No. 1 quarterback to lead his team.

How about the receivers that the No. 1 and his backups have to throw to? They’re just as important in the offensive scheme for the Sun Devils.

The current group of receivers for Arizona State isn’t the tallest, or most experienced group in the Pac-12, or the country for that matter, but Graham has seen them improve as training camp has gone on.

“The wide receivers at Tontozona have been the most improved group,” Graham said following Thursday’s morning practice.

The Sun Devils lost a great deal of offensive production from last season, with Gerell Robinson and Aaron Pflugrad departing, but redshirt junior J.J. Holliday thinks the team gained something to balance out those losses.

“What we lost, we gained in speed,” Holliday said.

Holliday mentioned players like Kyle Middlebrooks, Jamal Miles and Rashad Ross who he thinks are ready to take the offense to that next level.

Robinson was a big target at 6-foot-4. It’s hard to replace a talent of that stature, but Graham landed a talent that should be on par with Robinson, in Alonzo Agwuenu.

With those type of numbers, the offers surely came Agwuenu’s way, most notably from Kentucky, Nevada, Mississippi State and Oregon State.

Thankfully for Sun Devil fans, Graham wrestled Agwuenu away from them.

Agwuenu says it hasn’t been easy adjusting to the way Graham and his staff run the program, but he’s starting to adjust.

“I come from junior college, where we never really strained ourselves this much,” Agwuenu said. “You’ve got to wake up every morning with the attitude and mindset that you’re trying to get better, or else you’re going to come out here and fail.”

Another bright spot in the Sun Devil receiving corps has been red shirt junior Kevin Ozier.

Ozier was a non-scholarship player last year, who caught 11 passes for 169 yards and one touchdown.

Within his first two months on the job, Graham saw something great in Ozier, and placed him on scholarship.

Ozier is a nose-to-the-grindstone player, and his 6-foot, 198 pound frame will serve him well in the run blocking schemes the Sun Devil coaching staff are implementing, given all the talent they have in the backfield.

The Sun Devil coaches preach perfecting the fundamentals of the game, something Ozier thinks he and his fellow receivers are picking up quite nicely.

“Blocking drills, route running, top-of-my routes, we work on [them] before practice, after practice and during practice,” Ozier said. “Coach [Graham] really makes us work on that.”