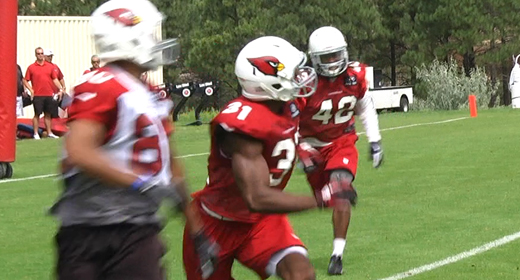 I’m sure there were a lot of naysayers out there that questioned the Cardinals selection of safety Justin Bethel in the sixth round of April’s NFL Draft, if only for the questions: “Who is Justin Bethel, and where is Presbyterian College?”

For those of you that have been to training camp to see Bethel in person, watch him on TV or at the stadiums during their games, all your questions about this young man have been duly answered, especially last Friday night in Glendale, as Bethel was a beast on special teams that night against the Raiders.

In the second quarter, Bethel blocked a Marquette King punt and ran it back 19 yards for a touchdown.

In the third quarter, Bethel came around the edge on a Raiders extra point attempt, and said, “Get that outta here Sebastian Janikowski!”

The kick was no good thanks to Bethel’s special effort on special teams, which he was known for at Presbyterian College, in Clinton, S.C.

If you haven’t heard, Bethel blocked nine kicks while at Presbyterian, which is a Big South Conference record.

Bethel already has three blocks so far this preseason. Imagine the possibilities come the regular season for this young man.

Bethel and the Cardinals take on the Tennessee Titans tonight at LP Field in Nashville, Tenn.

I asked Bethel if he could duplicate his Raiders performance versus the Titans.

“I’m gonna try, that’s the plan,” Bethel said. “Stuff like that doesn’t happen all the time, but I’m going to try to make it happen again as best as I can.”

Of course being a rookie means you have a lot to get up to speed on in a short amount of time. Head coach Ken Whisenhunt thinks Bethel’s doing well considering the time crunch he’s been under.

“He’s got a long ways to go defensively, but he’s working in,” Whisenhunt said. “That’s what you like to see. I’m really excited about Justin and the way he works, the way he’s made some plays for us in games. Obviously, that’s a pretty good pick that we got in the draft.”

I’m sure there’s 31 teams around the league (the Raiders included), that have seen the tape of Friday night’s game, and that are amazed by what Bethel’s done for the Cardinals in just three weeks, on special teams and on defense.

Bethel is quick to side with Whisenhunt on the defensive side, and the fact that he needs to tighten some things up on that end.

It never hurts to have guys in the trenches with you that have been through what you’ve been through and more, which is what Bethel has inherited here with the Cardinals.

Guys like Adrian Wilson, Kerry Rhodes, Patrick Peterson, William Gay and others, who have been an invaluable help to Bethel in his transition to the NFL.

“They’ve really helped,” Bethel said. “They help me with my technique, they’re encouraging me. I might mess up a little bit, and they’re still encouraging me, telling me “Don’t worry, you gotta just study and study and it’ll come to you.”

Bethel couldn’t be more excited about Sept. 9, and the season opener with the Seattle Seahawks at University of Phoenix Stadium.

“Oh I’m excited, I’m ready to get it going and get in my first ever official NFL game, I’ll be so happy,” Bethel said.